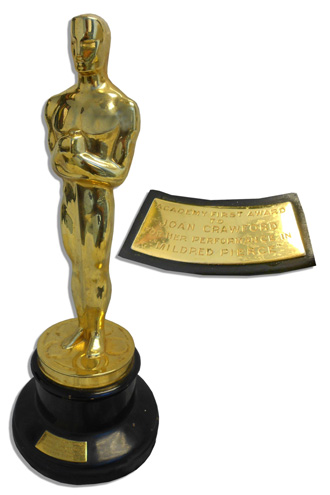 LOS ANGELES - The best actress Oscar won by Joan Crawford for her role in classic film noir “Mildred Pierce” has been sold at auction for $426,732.

Crawford, who died in 1977, won the award in 1945 for her portrayal of a middle-class housewife struggling during the Great Depression, beating favorite Ingrid Bergman.

The actress thought she wouldn’t win the Oscar so didn’t go to the Academy Awards ceremony, pretending to be ill. It was accepted on her behalf by her director, Michael Curtiz.

She invited reporters to her hotel bedroom to receive it herself, famously saying: “Whether the Academy voters were giving the Oscar to me, sentimentally, for Mildred or for 200 years of effort, the hell with it -- I deserved it.”

The Oscar was sold on Tuesday by celebrity auctioneers Nate D. Sanders Auctions in Los Angeles.

“This Oscar carries with it a fascinating story as well, and represents Joan Crawford’s gutsy comeback in the industry that labeled her ‘box office poison’ several years earlier,” said Sanders. “It’s really one of the most spectacular Oscars in existence.”