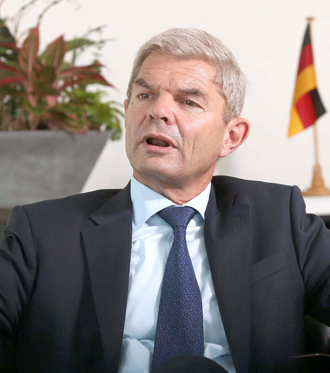 Forging strong ties with Japan will be a key for Korea to maximize its potential in the global arena, said Rolf Mafael, the newly appointed German Ambassador to Seoul.

“My personal observation would be [that] if you look at these two formats of trilateral cooperation, there are two countries which are present in both. And therefore, I believe that the relationship between Korea and Japan is key in order to maximize Korea’s potential.”

Ambassador Mafael, who will present his credentials to the Blue House on Oct. 5 after arriving here in July, has a wide range of experience, including working as a public prosecutor before becoming a diplomat.

He shared his views on current issues involving Northeast Asia and South-North unification, and the rebuilding of post-war Germany.

Q. There are conflicts in Asia among Korea, China and Japan over territory and history. What are your personal views?

A. I was posted in Japan from 2002 to 2005 and I very much remember the period under [Junichiro] Koizumi on the Japanese side. There was a lot of enthusiasm in developing a relationship between Japan and Korea and building a new partnership between the two countries. Against this background, I feel rather sorry that several years later, we see the same kind of disputes that were [also] underlying at the time. And I would really hope that countries will be in a position to overcome these difficulties. If you imagine Korea and Japan working as closely together as Germany and France have been doing, not at the European Union level but bilaterally, you could imagine that these two countries together could multiply their potential in influencing global governors, in influencing global politics. It is worth some time closing the eyes and dreaming of two things. One is dreaming of [South-North] Korea unification and one is dreaming of complete reconciliation and cooperation between Korea and Japan.

In 1971, former West Germany Chancellor Willy Brandt kneeled down in front of Warsaw’s Monument to ask for forgiveness from Jews. No such apology has been made by Japan to Korea over its past [1910-45] colonization. Should Japan show a similar gesture?

My feelings are that it is not the most appropriate example [for Korea and Japan to reconcile]. If you do the same gesture in this area, in East Asia, I wonder whether it would not be seen at the same time as a gesture of subordination. And I cannot imagine that any country here wants to subordinate to another country.

For this reason, I believe it can only be seen as a symbol but not as something which can be followed in this region. I would hope that a much broader approach will be necessary, or will be proposed by the young generation in order to overcome history.

The Korea-China-Japan free trade agreement is facing challenges because of territorial disputes. Do you think economic cooperation can be dealt with separately from politics? What lessons can we learn from the example of the European Union integration?

If you look at the EU example, certainly, at the very beginning in 1954, the ideas were to create a political union, even a defense union. And that turned out to be too ambitious, and therefore, as a consequence, cooperation focused on the economic side. If you look at East Asia, it’s obvious that trade and investment, especially between the countries of Northeast Asia, has been increasingly enormous over the last 10 to 15 years.

And it would seem to me that this increase in regional economic cooperation is a stabilizing factor for overall relations between your country and the region.