Envoy lashes out against Japan claims over Dokdo

Envoy lashes out against Japan claims over Dokdo 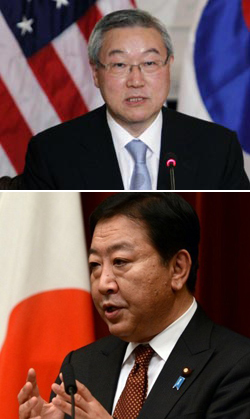 Minister of Foreign Affairs and Trade Kim Sung-hwan has made an unusually pointed criticism of Japan’s claims over the disputed Dokdo islets, calling them “an attempt to invade” Korea once again after the brutal colonization in early 20th century, and condemned Japan for a lack of education about its wartime atrocities.

In an interview with The Associated Press on the sidelines of the UN General Assembly on Thursday, Kim said: “We are victims of Japanese colonial rule. When the Japanese government claims Dokdo is its territory, Korean people [take] it as another attempt to invade our country.”

He said that there would be no compromise on the matter of the disputed islets, called Takeshima by Japan, and that his position represented the overall Korean public’s view on the matter.

Kim also said that in order to improve the soured relations between the two countries, Japan should educate people about their wartime crimes, such as forced sexual slavery of Asian women including Koreans, because that is the root of the current territorial fight between Japan and other Asia-Pacific superpowers.

Kim also met with Korean correspondents staying in New York and told them that the younger generation of Japanese politicians who were born after World War II are mostly ignorant of their past wartime crimes because they were not properly taught about them, while the older generation that witnessed or learned what they did during the war were relatively apologetic.

“It’s because [Japanese schools] don’t teach the right history,” Kim said. “If they indeed knew the history, they wouldn’t have spoken like this about it.”

When it comes to Japan’s proposal for taking the territorial issue to the International Court of Justice, Kim said that Japan has a “double standard” in dealing with the issue.

“They asked us to go to the ICJ, but they don’t say the same thing to China or Russia [about other disputed islands they are effectively dominating],” Kim said. “Their actions are inconsistent, whatever they argue.”