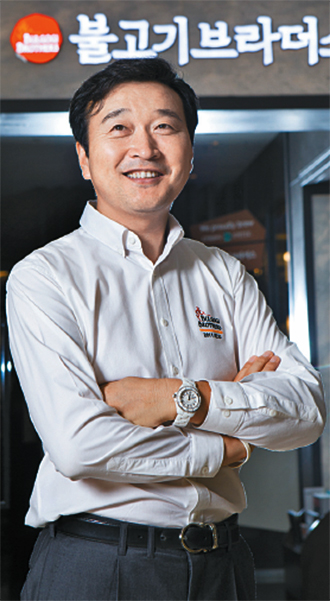 Yi Chai-woo, cofounder and president of Bulgogi Brothers, a Korean restaurant franchise that specializes in Koreans’ favorite marinated barbecued beef, says the trick to globalizing a Korean dish like bulgogi is to maintain its genuine taste, not tailoring the recipe to foreign taste buds.

“What foreign customers truly want is authentic Korean cuisine, not localized Korean foods that taste different from what they had in Korea,” Yi said in an interview with the Korea JoongAng Daily last week. “The bulgogi you eat in Canada, Malaysia or the Philippines needs to taste the same as what you ate in Korea.”

To make this happen, Bulgogi Brothers sends crucial ingredients, including sauces, spices and even kimchi, to its overseas stores.

Yi, a former waiter at Lotte Hotel’s Peninsula restaurant, is responsible for bringing two popular U.S. restaurant chains, TGI Friday’s and Outback Steakhouse, to Korea. He launched the casual dining restaurant Bulgogi Brothers in 2006. It had 40 billion won ($35.7 million) in sales in 2011.

His first foray abroad was a Bulgogi Brothers in the Philippines in September 2011. Bulgogi Brothers franchises are now operating in Canada and Malaysia too, and branches in Singapore, Thailand and Indonesia are planned for next year.

The Bulgogi Brothers Sangmu branch in Gwangju, South Jeolla. Provided by the company


Q. How do you keep the taste of bulgogi in overseas branches the same as in Seoul?

A. We make sauces in Korea and export them to our overseas stores. Because we cannot export fresh vegetables, our chefs visit related countries and designate specific peppers and lettuces that taste similar to the produce grown in Korea. We use kimchi made by Chongga Food. We also use certain kitchen tools including induction cookers made by Korean manufacturers. Foreign customers demand us to cook exactly the same way as in Korea regardless of whether the food is spicy. Korean restaurants overseas get the highest credit when a foreigner who visited Seoul tells his friends that food he tried in his neighborhood serves authentic Korean cuisine. In the case of Malaysians, who doesn’t consume pork, we added chicken and lamb to our menus.

How did your experience with opening branches of TGI Friday’s and Outback Steakhouse affect the management of Bulgogi Brothers?

Bulgogi Brothers created its own franchise contract blending the advantages of the two American franchises. TGI Friday’s uses a master franchise contract that gives a business partner the exclusive right to operate in one country by paying a $500,000 initial fee. He needs to pay an additional $50,000 to $60,000 per store opened. Outback Steakhouse uses a store-by-store contract, which means it grants rights to any investor who pays a $125,000 fee to open a store. The advantage of Outback’s model is that you have the upper hand dealing with investors. You can let other investors open new stores if your previously contracted partners aren’t doing well. When we open stores outside Korea in partnership with local restaurant investors, Bulgogi Brothers charge $60,000 per store as a franchise fee and we collect 4.71 percent of annual profits as a royalty. This is the first case in which a Korean franchise company used such a contract. We’re also involved in franchises’ personnel training system.

How is Bulgogi Brothers coping with the slowdown in the global economy?

Providing service and quality food at reasonable prices is the ultimate solution to beat a sluggish economy. This worked during the Asian financial crisis and subprime mortgage crisis in the U.S. We have launched an emergency management system in June to boost sales by cost-cutting. We don’t cut manpower but we find ways to improve productivity by outsourcing some of our menus. Hyundai Motor doesn’t manufacture nuts and bolts. In a similar vein, we use kimchi made by Chogga Food. We have also revived the 9,900 won bulgogi lunch set menu this year, which was first introduced in July 2007.

Some analysts at brokerage firms suggest China and Japan’s territorial disputes could be a boon to the Korean economy as Chinese tourists will come to Korea instead of Japan during the holiday in October.

Why does Korean cuisine still have such a low profile around the world despite the fact that there are Korean restaurants run by Korean immigrants just about everywhere?