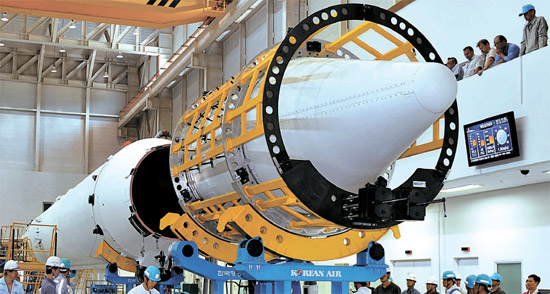 At the end of October, Korea is planning on launching the rocket Naro-1 for the third time. Korea’s first-ever attempt to launch a rocket came with the previous two failures to put a research satellite into orbit on Naro-1 in August 2009 and June 2010. Following that, the budget for this year’s project was cut by 30 percent.

Lee Gyu-shik of the Korea Aerospace Research Institute said, “We have designed a Korean liquid-fueled engine but because of a shortage in funding are not able to secure a testing facility.” 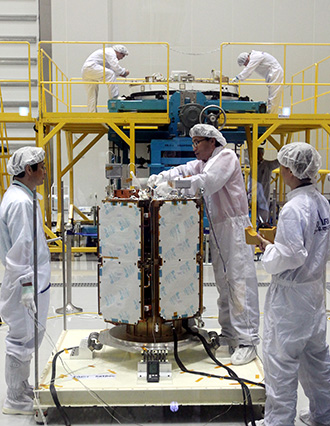 Attempts to launch Naro-1, Korea’s first space rocket, into orbit in August 2009 and June 2010 both ended in failure, leading to a 30 percent cut in funding for the rocket launch project this year. [YONHAP]

On the surface, being a scientific researcher in Korea seems like a pretty good job.

Last year, the government poured 16 trillion won ($14.3 billion) into research and development, the fifth-highest R&D investment rate in the world. Investment in R&D increased 9.6 percent on average for each of the past five years, according to the National Science & Technology Commission.

In recent years, the ministries of Knowledge Economy and Education, Science and Technology have reported a success rate of over 95 percent for its research projects.

Despite this, more than seven in 10 scientists expressed dissatisfaction with the government’s science and technology policies in a recent survey by the JoongAng Ilbo with the Korea Federation of Science and Technology Societies and the science and industry Web site Daedeoknet.

Due to an unrealistic demand for successful research results and difficulties in obtaining funding, scientists admit results sometimes come with a sacrifice in the quality of research.

Further complaints include that “every time a new administration sweeps in, science policies are changed in an inconsistent manner.”

“The moment you become the head of a research project, research itself goes down the drain. In order to get a research project started, you have to buy meals for government officials,” said Philip Kim, physics professor at Columbia University in the United States. Kim was a research assistant at Seoul National University before taking his position in the U.S.

He added that sometimes researchers have to write up reports that officials should be writing in order to curry favors.

“The kind of research environment needed is not one where professors and researchers ‘plead’ to government officials in order to obtain research fees, but one where scientific reasoning can be employed to justify why the research is important,” he added.

That is not due to the excellent caliber or high level of research conducted, but because researchers feel obligated to undertake easier assignments or because of pressure to hide failed research in their reports.

There is no such thing as failure allowed for researchers.

“The unrealistically high success rate of research assignments is considered to be a problem,” said an official from the Ministry of Knowledge Economy.” Pretty soon, there are plans for reform measures to be undertaken.”

The ministry indicated that realistically, the government’s R&D projects should have a success rate of between 50 percent and 60 percent by 2015.

In the case of the Electronic and Telecommunication Research Institute, the largest government funded research institute founded in 1976, the funding per project in 2006 was 184 million won. But last year, that dropped to 102 million won.

Larger scale projects that had a budget of over 5 billion won decreased by over a third in that time frame from 35 projects to 10 last year.

A researcher at the institute said, “Because everyone’s bent on performance, the term of the research project is becoming shorter and the project itself has become smaller, which indicates retrogression in the scientific research environment.”

Atop of limited finances, researchers feel stress from constant micromanaging of research funds.

For the past five years, Lee, 31, managed funding for research centers in universities in Daejeon and the South Chungcheong area, stating that “just to purchase two computer monitors worth 360,000 won each,” an elaborate proposal had to be written up, complete with seven additional papers explaining the reason, use and estimated cost of the purchase.

“We had to submit the monitors’ serial numbers, photo, a detailed statement of purchase and who will be using them in which rooms,” he added. “Isn’t this a case where the belly button is bigger than the belly,” a Korean idiom which means making more work than necessary and forgetting what is important.

An alternative to such scrounging for research funds is receiving grants, which leaves how the money is allocated to the recipient until research is completed.

In the case of U.S. independent federal agency National Science Foundation, it provides 70 percent of its researching funding in the form of grants.

In Korea, 90 percent of government R&D funds are given through research agreements, which require stringent monitoring throughout the research process, a lot of paperwork, and reports and review of all funds used in the research.

The Ministry of Education, Science and Technology established a Korean-style grant system in January to provide 50 million won to support researchers. Up until last year, Korean researchers had to submit tens if not hundreds of extensive, lengthy result reports and were also subject to evaluation by a committee.