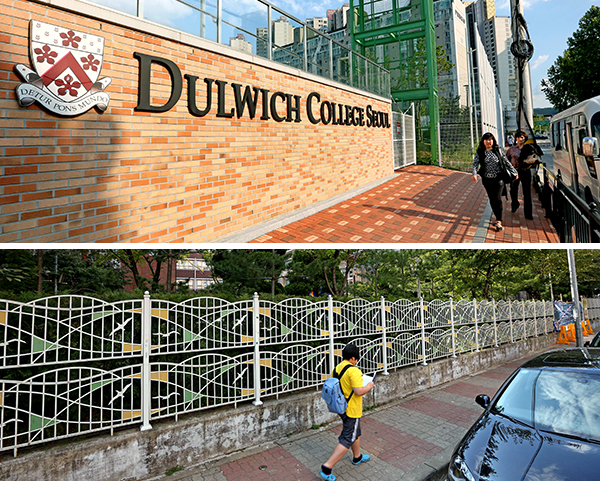 Top: A 3-meter-high (9.8-foot-high) brick wall and 4-meter-high metal fence stand outside Dulwich College Seoul, a foreign elementary school in Seocho District, southern Seoul. Above: A student passes a 2-meter-high fence at Gyeseong Elementary School, which is next to the Dulwich school. By Kim Do-hoon


The poor security and safety environment of schools have become controversial again as a group of elementary school students faced an 18-year-old stranger armed with a shovel and a BB gun during class.

At 11:50 a.m. on Friday, a group of students in Gyeseong Elementary School in Banpo-dong, southern Seoul, were at risk when a 18-year-old boy surnamed Kim, a high school dropout, broke into their classroom.

Allegedly, Kim forced students into a corner of the classroom with a BB pistol and indiscriminately wielded a 60-centimeter-long (23.6-inch-long) entrenching shovel. From the attack, a total of six students were injured or hospitalized. An 11-year-old boy surnamed Jang was hospitalized after he was hit in the chin. Another boy and girl, both age 11, were also hospitalized after being hit by the assailant. Three more students, a boy and two girls, were also slightly injured, but went home after being treated at a hospital.

A 37-year-old female teacher surnamed Joo was in the classroom, but couldn’t stop the suspect. Kim was eventually suppressed by two male teachers who were teaching class in the next classroom after a tussle, according to the Seocho Police Precinct, which is investigating the case.

The school believed the suspect entered the school facility through the back gate which had been left open during school hours due to construction work.

After questioning the suspect, the police discovered that Kim dropped out of high school in Incheon last year and has been suffering from serious depression ever since.

“Kim was violently abused by his father,” an official of the Incheon school said. “He was predisposed to violence, sometimes breaking school supplies such as desks and chairs without a reason. He also attempted suicide on the rooftop of the school building last year.”

Despite the life-threatening incident at the elementary school, it was still exposed to potential danger when the JoongAng Ilbo visited the school days after the crime. Parts of the wall surrounding the school were intentionally knocked down by workers to bring in construction materials and they remained broken. The walls are only 20 meters (65 feet) away from the back gate of the school, where the suspect entered.

Instead of walls or fences, iron pipes stood 1-meter high and mosquito nets hung between the pipes to keep people off the school grounds, but it wasn’t strong enough to prevent a grown man from trespassing.

Between the pipes, signs read “safety first!” The condition of the Gyeseong Elementary School is in stark contrast to Dulwich College Seoul, a foreign elementary school in Seocho next to Gyeseong, which is surrounded by a 3-meter-high brick wall and 4-meter-high metal fence.

Since 2010, improving the safety environment around public areas, including schools or public parks, became a hot issue when an 8-year-old elementary school girl was kidnapped and raped by 45-year-old suspect Kim Su-cheol in broad daylight at an elementary school in Yeongdeungpo District, western Seoul.

The suspect entered the school grounds while he was intoxicated and wandered the hallways unnoticed for an hour with a box-cutter knife. He found the girl alone on the playground. The suspect then took the girl to his house and raped her.

The Ministry of Education, Science and Technology has provided a series of plans to improve school safety, assigning 8,355 voluntary custodians, who are retired police officers and teachers, to 7,541 schools and also installed 100,053 CCTVs in 11,087 schools nationwide.