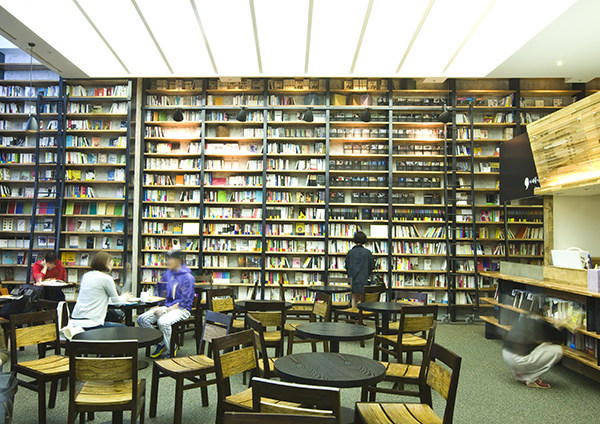 The 41-year-old visits a book cafe operated by Jaeum & Moeum publishing company at least twice a week. The cafe - located on the ground floor of company headquarters in Seogyo-dong, central Seoul - is her workspace.

Kim takes her laptop and works on her script for four to five hours. She gets ideas from some of the 5,000 books on display, sipping coffee to clear her head.

No one minds that she occupies a seat for so long.

“It’s less stifling and static than offices, yet more academic and quiet than coffeehouses,” Kim says. “Also, it’s a place where I can engage in both personal writing as well as group meetings.”

Ha Gyeong-jin, a university graduate hoping to land a job soon, is also a fan of book cafes run by publishers. He says it’s a more pleasant study environment than libraries and allows him to easily keep up with the latest releases.

“Here, you can view all the books that the publishers have released at a glance,” Ha says. “There are other book cafes [not operated by publishing companies], but oftentimes recently released books are not available, while bookstores are usually splashed with best sellers.”

Cafes operated by publishers that have struggled to sell print books in recent years are on the rise. Major publishing companies in Korea, including Jaeum & Moeum, Munhakdongne, Humanitas and Changbi, have all taken a shot at the cafe business. Their businesses are all located in the Seogyo-dong and Donggyo-dong in central Seoul, heating up the competition.

Cafe Comma run by Munhakdongne and cafe Jaeum & Moeum opened second branches within the past two months, a noteworthy development in a neighborhood that is home to Hongik University and notoriously crowded with cafes and restaurants. And both publishers say they plan to add more branches in coming months. 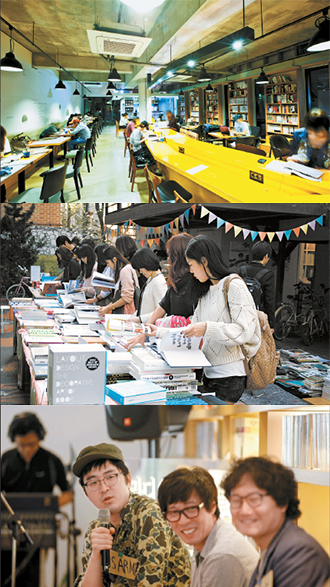 From top: Branch No. 1 cafe at Jaeum & Moeum is somewhere between a library and coffeehouse; tables of refurbished - and discounted - books draw a crowd at Jungle; and Cheon Myeong-gwan (middle) meets with fans after a reading at Cafe Changbi. [JoongAng Ilbo]

The best part about publishers’ book cafes is that people can look at the complete list of the publisher’s books as well as buy some of them at discounted prices.

At Cafe Comma, all books available for purchase are priced at 50 percent of retail. Three-hundred people visit each weekday and about 400 daily on weekends. Each day, 40 to 50 books are sold, which translates to a profit of about 15 million won ($13,467) a month.

The cafe contains 3,500 books, from some best sellers by Japanese writer Haruki Murakami to classics. Until recently, only 30 to 40 of them were available for purchase, but the publisher increased that to about 5,000. The cafe expects its profits to expand as a result.

So how can publishers mark down the prices so steeply?

It’s because books offered in cafes are so-called “refurbished products,” or books that weren’t sold at stores and returned to the publisher. “Many people just come here to browse through books and end up buying books,” said Jang Eu-tteum, a chief executive of Cafe Comma. “Refurbished books are new books that would have to be discarded. So selling them is a win-win situation for both the publisher and buyer.”

Other book cafes run by publishing companies have introduced a set menu - a cup of coffee bundled with new releases. At cafe Jaeum & Moeum, the “set” includes coffee plus the new novels by Kim Yeon-su or Baek Yeong-ok. For instance, an Americano and “If a Wave Is the Work of Sea,” by Kim Yeon-su, would normally cost 17,500 won, but the cafe sells it for 12,000 won. As an added bonus, the book is autographed by Kim.

Jaeum & Moeum has set up a booth outside its cafe for refurbished books and sells 300 to 400 a month. “Usually at bookstores, the books that are not on the best-seller shelves don’t sell well,” said Lim Ja-yeong, a manager at the cafe. “But at cafes like ours, we shed light on books that haven’t gotten much publicity or marketing.” 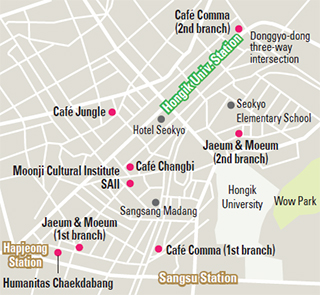 But book cafes are about more than just making money for publishing companies.

They are vehicles through which publishers can express their companies’ colors, styles and visions.

For instance, Humanitas, which specializes in social science books - runs a book cafe called Chaekdabang. Chaek means book in Korean and dabang is a coffeehouse, or teahouse.

The company sells 130 of its books at a 30 percent discount and has made available for reading about 1,300 books on social science and liberal arts donated by other publishers.

“The cafe and publishing company’s office space are in the same building, but profits from the cafe alone pay for the rent of the two,” said Park Gyeong-chun, an official at the company’s sales division. “It’s because bookstores that specialize in social science are gone. Some people come from pretty far away.”

Design Book, which imports and sells foreign design books, also runs a cafe called Jungle. In line with the company’s characteristics, the ground floor bookstore and cafe on the second and third floors are trendy and chic.

Most of these cafes are frequented by book aficionados, officials say, who tend to work in such areas as writing, translating or design. Chaekdabang offers individual desks with lamps, while Jungle allows free use of seminar rooms.

Book cafes are also venues where writers and their readers can interact. The liberal arts cafe Changbi often holds readings, poem recitals and other events. Recently it held meet-the-writer sessions for Cheon Myeong-gwan and Eun Hee-gyeong.

“Before, when we organized such events we had to find and rent venues,” said Jeong Ji-yeon, a manager at the company. “But since we opened the cafe, there is no such hassle and we are holding twice as many events.”

Critics also note that the emergence of cafes run by publishers indicates just how difficult the business has become. Such hard times have forced companies to diversify their businesses.

“As a large number of small bookstores have closed, publishers themselves have become the offline channel for book sales,” said Pyo Jeong-hun, who writes about the industry.

“The cafes run by publishers will need to develop their planning skills and hold creative events in order to differentiate themselves from other book cafes where the books seem to be nothing more than decorations.”