Banks beg the salaried to borrow

Banks beg the salaried to borrow 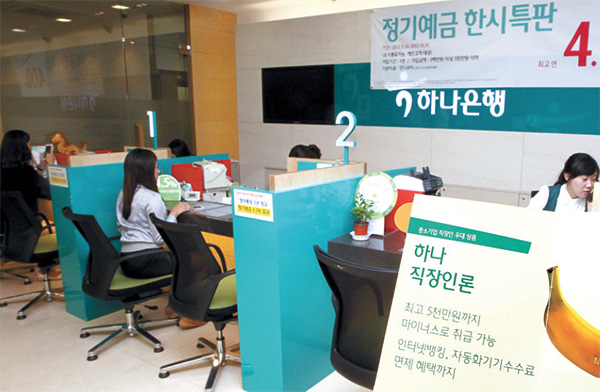 A Hana Bank branch in Seoul displays its loan products for company or government employees Thursday. By Kim do-hoon

He gets text messages on his phones, faxes and is even visited at his office by employees of his local bank branch.

“A branch manager I’m personally close to nags me to introduce other people who might be interested in taking out loans,” Lee complained. “The competition must be fierce as they offer annual interest rates lower than 5 percent.”

Banks are begging customers to borrow as their revenue tumbles due to the sluggish economy. Especially as small, midsized and private companies stay clear of new debt due to the bad economic situation, banks are desperate to find new customers.

Office workers, which in the past were considered small fish, are viewed as a blue sky field. The overdue payment ratio for office workers is less than for small and midsize companies or entrepreneurs.

Woori Bank is offering a loan that charges a 4.69 percent interest rate to office workers with annual incomes of 30 million won or more.

Banks have also been targeting civil servants and servicemen with customized products.

Shinhan Bank introduced a credit loan with an annual interest rate of 4 percent exclusively for police officers. Hana Bank launched a deposit for military officials only. The Guardian loan by Korea Exchange Bank, which is only available for fire fighters and police officers, offers accident insurance for free.

Bank officials say they are looking to stable salarymen because they manage their household finances in responsible way and pay bills regularly.

“While banks’ entire loan overdue rate is around 1 percent, the overdue rate of teachers is around 0.15 percent and 0.1 percent for civil servants,” said Park Hae-pyo, a director at KB Kookmin Bank’s loan division. “Competition among the banks is fierce to attract office workers who have shown less risk in payment delays.”

“We are in a situation where we can no longer expand our mortgages because of the frozen real estate market while those whose income rolls in irregularly are quickly closing their deposit accounts,” said an official at Shinhan Bank.

“Even if the amount is little, we have no choice but to be interested in office workers who make regular payments.”

As banks are competing to get more office workers as their customers, the interest rates on loans are going down.

“I’ve been working for more than 16 years in this business but this is the first time that I have seen a loan without collateral offered at a 4 percent interest rate,” said Yoon Jong-guk of Hana Bank. “This means that the bank’s biggest goal is to reduce insolvency even when their profits are being downsized.”

People on pensions are valued customers for banks. Hana Bank launched a bank account Thursday especially for pensioners. Those who get regular annuity from the bank’s own pension programs can also sign up for the account. The account gives annual interest up to 2.5 percent on the balance.