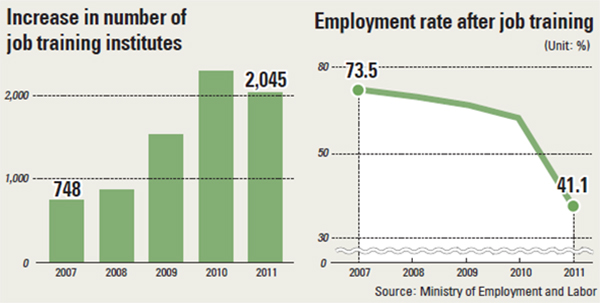 Despite the government allocating some 226 billion won ($201 million) for an employment training program just this year, the unemployment rate continues to rise.

“Tomorrow’s Learning,” one of many government policies created to boost employment since 2008, is designed to provide training for those seeking employment.

Those who are unemployed can receive up to 2 million won from the government to train for a job through the program.

Such was the case for an unemployed man, Kang, 49, who received lessons at a computer training hagwon, or private academy, for three months since October of last year.

Usually, the individual pays 25-45 percent of the training costs and the government bears the rest of the burden.

Kang was told by the hagwon supervisor, “If you complete this program, it’ll be easy to find a job.”

But Kang failed to find employment, and eight months later, he was back seeking consultation at an employment center in Seoul.

“I spent 400,000 won of my own money and went to the hagwon for three months, but when I went to find a job in several places, they all said my training level was substandard and refused me,” said Kang.

The “Tomorrow’s Learning” program, which enables people who are unemployed to receive further training at a hagwon, was created to boost employment by the Lee Myung-bak administration and began its trial run in 2008. It was officially launched last year.

Thus, job training institutes increased from 748 in 2007 to 2045 in 2011. The number of unemployed seeking job training more than doubled from 116,528 to 257,324 in that same time period, according to data that Representative Hong Yeong-pyo of the Democratic United Party received from the Ministry of Employment and Labor.

But the employment rate of those who received such job training dropped 32 percent during that period, from 73.5 percent employment in 2007 to 41.1 percent by 2011.

Though numerous training institutes have popped up over the past several years, many of them have not gone through proper screening.

The Labor Ministry said that of a total of 16,000 training programs for the unemployed, only 19 percent were in operation longer than six months.

In 2007, before the implementation of the policy, further training for employment usually was done through trade schools and colleges that were regulated by the government to learn specific skills for the job.

At the same time, the number of these specialty schools have decreased from 729 in August 2011 to 547 this April.

Yoo Kil-sang, head of the human resources development graduate school at Korea University of Technology and Education, said regarding the training hagwon that, “There is the side effect of even lower employment rates because the number of people enrolled has increased” while the training hagwon are not verified to teach specific skills. Hence, those enrolled are not necessarily improving their skills.

“The limitations of an employment policy which focuses just on short-term results are being revealed.”

Many quit the training programs halfway through the course because they still have to bear between a quarter to nearly half the cost of training even though they aren’t making any money.

Byun, 36, who runs an Internet shopping mall, said, “Because we need employees who have to complete specialized tasks, it’s difficult to willingly hire those who received such short-term training.”