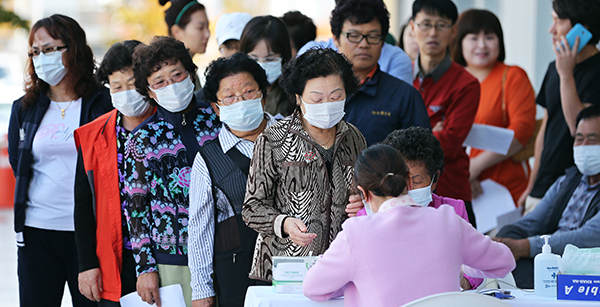 Residents from areas affected by the gas leak at a chemical plant in Gumi, North Gyeongsang, wait in a line yesterday for blood tests in Bongsan-ri, Gumi. The town is about 200 meters (219 yards) from the site of the leak at the industrial complex. [YONHAP]


To escape pollution from the massive Sept. 27 gas leak at the Gumi National Industrial Complex, which claimed the lives of five workers, about 300 people who live nearby voluntarily evacuated to temporary shelters over the weekend.

Their departure came after 2,563 people in Gumi received medical treatments for exposure to the hydrofluoric acid, which can lead to blindness and harm lungs, bones and the nervous system. Some were hospitalized for having inhaled the gas and then started coughing up blood or reporting severe headaches, according to the Gumi City Government.

An emergency center run by the municipal government, however, said yesterday it is not planning a government-ordered evacuation. “The decision will be made after assessment results of the toxicity levels in the air come out sometime this week,” it said.

The accident occurred on Sept. 27. at 3:43 p.m. when a tanker truck containing hydrofluoric acid at the Hube Global plant in Gumi, North Gyeongsang, developed a leak due to increased pressure within a storage tank or in a hose connected to it during a transfer.

Authorities are under mounting criticism for their handling of the accident.

When the leak occurred, residents of the Bongsan-ri area in the southeastern city of Gumi, North Gyeongsang, evacuated, but went home the next day because the Gumi City Government said the leak was harmless. They cited a low concentration of hydrofluoric gas in the air.

But the gas had polluted large areas of farmlands around the industrial complex.

The emergency center reported yesterday that 77 companies in the complex reported 17.7 billion won ($15.9 million) in damage from the accident. The size of farmland and orchards affected by the leak was reported yesterday to be 212 hectares (523.8 acres), up from the 135 hectares reported last Friday. Fruits and crops have withered in the fields.

Presidential candidate Moon Jae-in of the opposition Democratic United Party visited Bongsan-ri yesterday and called on the government to “immediately designate the affected areas as a special disaster area,” and to “find out exactly what went wrong.” It was the first time one of the three major presidential candidates visited the contaminated area.