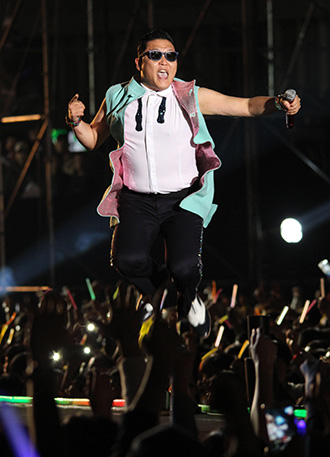 Psy’s viral song has exceeded 410 million hits on YouTube as of Oct. 8.
The video, released on July 15, chalked up more than 100 million hits in 52 days; meanwhile on the 66th and 76th day it amassed 200 million and 300 million respectively.

To date, the video is ranked ninth on the “most watched video of all time” segment on YouTube.
It is the only video so far this year to make it onto the coveted list.

The follow-up video to “Gangnam Style” featuring 4Minute’s Hyun-a stands at some 76 million hits to date.

Meanwhile in the United States, military academies are also jumping on the bandwagon, releasing parodies featuring cadets and having a sort of battle to see which academy can produce the best spoof.
West Point’s version of “Gangnam Style” has garnered 925,000 views so far.