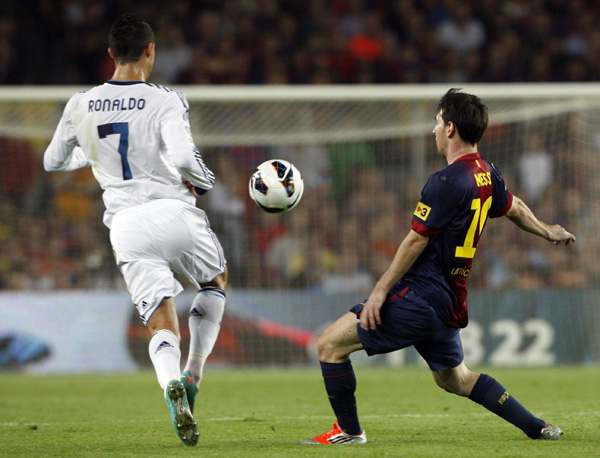 
BARCELONA - Lionel Messi and Cristiano Ronaldo dueled each other to an entertaining stalemate on Sunday, with both superstars scoring twice as Barcelona drew 2-2 with Real Madrid to keep an eight-point lead over its archrival intact.

The result ended Barcelona’s perfect start to the league campaign as it dropped points for the first time in seven games, but provided yet another memorable chapter in the rivalry between Messi and Ronaldo, the two biggest names in soccer.

“It should be prohibited to say which is the best in the world,” Madrid coach Jose Mourinho said. “They are both from another planet.”

Ronaldo put Madrid ahead at Camp Nou stadium in the 23rd from a pass by Karim Benzema to extend his scoring streak in “Clasico” matches to six.

Then it was Messi’s turn, as he took advantage of a defensive slip to level for Barcelona in the 31st, before adding a second goal in the 61st with a perfect free kick from almost 25 yards out.

But as Barcelona looked to seal the result, Mesut Oezil unlocked Barcelona’s makeshift defensive line to set up Ronaldo to respond five minutes later and split the points.

It was, perhaps, a fitting end to the latest head-to-head duel between arguably the two best players in the world, who for the last two seasons have engaged in a two-way scoring race unlike anything the Spanish league has seen before.

“[Messi and Ronaldo] both try to do everything they can to help their teams and score goals,” Barcelona coach Tito Vilanova said. “If Ronaldo hadn’t coincided with Messi, perhaps he would get even more recognition.”

Not to be outdone, Atletico Madrid striker Radamel Falcao also scored twice on Sunday, including a 90th-minute winner, to earn a 2-1 win over third-place Malaga. The Colombian international leads the league with nine goals, one more than Messi and Ronaldo.

Atletico’s sixth straight victory lifted it even on points with Barcelona at the top of the standings.

In England, Manchester United relied on early goals from its much-maligned defense and a stunning strike from Tom Cleverley to secure an impressive 3-0 win at Newcastle, keeping the pressure on Chelsea at the top of the Premier League.

Jonny Evans and Patrice Evra scored on headers from corner kicks for United in the opening 15 minutes. Cleverley scored on a long-range shot in the 71st that curled in.

The frustration continues for Liverpool, which tied Stoke 0-0 at home. In Sunday’s other match, Jose Fonte scored a late tying goal - his second of the game - to earn Southampton a 2-2 tie against Fulham. Tottenham won 2-0 against Aston Villa.

In Italy, 10-man Inter Milan hung on to beat crosstown rival AC Milan 1-0 in a bad-tempered Serie A derby that saw the hosts have a goal disallowed and a late penalty appeal waved away as they chased an equalizer.

Walter Samuel headed Inter in front in the fourth minute following a howler from goalkeeper Christian Abbiati. Milan improved but had Riccardo Montolivo’s goal disallowed for a foul on Inter goalkeeper Samir Handanovic.

In France, Marseille kept hold of first place in the French league after drawing 2-2 with bitter rival Paris Saint-Germain, with strikers Zlatan Ibrahimovic and Andre-Pierre Gignac both scoring twice with well-taken goals in a pulsating first half.

PSG would have overtaken Marseille for first place with a win, remains three points behind Marseille after eight games.

In Germany, Defending Bundesliga champion Borussia Dortmund lost more ground to Bayern Munich when it conceded a late goal and had to settle for a 1-1 tie at Hannover.