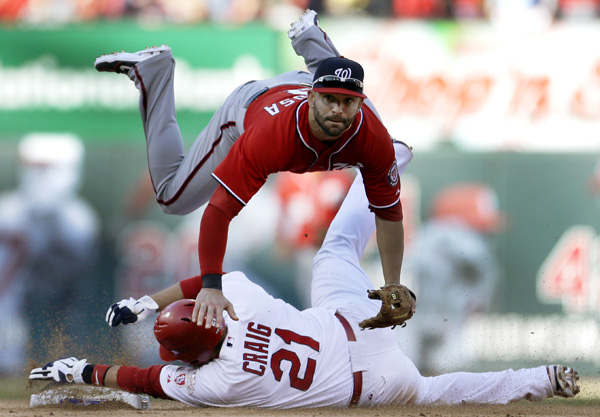 
BALTIMORE - For eight innings, the New York Yankees and Baltimore Orioles staged a magnificent duel worthy of two division foes that split 18 games during the regular season and finished two games apart in the standings.

Then the Yankees brushed aside the upstart, inexperienced newcomers and crashed a party 15 years in the making.

Russell Martin led off the ninth inning with a tiebreaking home run off Jim Johnson, CC Sabathia turned in a sparkling pitching performance and the Yankees pulled away to a 7-2 victory Sunday night in the opener of their AL divisional series.

Sabathia allowed two runs and eight hits in 8 2/3 innings at Camden Yards to help the Yankees take the edge off the Orioles’ first home playoff game since 1997. The husky left-hander went 0-2 in three starts against Baltimore during the regular season, but in this one he returned to form and improved his lifetime record against the Orioles to 17-4.

“Fastball command was good, worked off that,” Sabathia said. “Throwing the ball pretty good getting the corners. Tried to stay out there and make some pitches.”

Sabathia is 6-1 with the Yankees in the postseason, 4-0 in the division series.

“I thought he gave us a great performance,” New York manager Joe Girardi said. “Didn’t give up a lot of hard-hit balls tonight, had a really good changeup tonight, and I thought he used it very effectively.”

With the score tied at 2, Martin drove a 2-0 pitch from Johnson into the left-field seats.

“I definitely wasn’t thinking home run,” Martin said. “He left a fastball up and I put good wood on it.”

It was the first of four straight hits off Johnson, who led the majors with 51 saves. Raul Ibanez and Derek Jeter followed with singles, Ichiro Suzuki drove in a run with a swinging bunt and one out later, Robinson Cano hit a two-run double.

In an NL playoff opener on Sunday, the Washington Nationals escaped a bases-loaded jam in the seventh inning, Tyler Moore blooped a two-out, two-run single in the eighth and Washington beat the defending World Series champion St. Louis Cardinals 3-2.

The Nationals, who had never come close to making the playoffs since moving from Montreal for the 2005 season, overcame a wild start by 21-game winner Gio Gonzalez. They limited the Cardinals to just three hits.

Rookie reliever Ryan Mattheus needed just two pitches to bail out the Nationals in the seventh with St. Louis ahead 2-1. Moore, another rookie, put them ahead soon after that, Tyler Clippard worked around an error in the eighth and Drew Storen saved it with a 1-2-3 ninth.

The NL East champion Nationals led the majors with 98 wins this season, and brought postseason baseball to Washington for the first time since 1933. The Nats go for a 2-0 series lead Monday when Jordan Zimmermann opposes Jaime Garcia.

In San Francisco, Bronson Arroyo pitched the Reds back to Ohio on quite a playoff roll.

Arroyo retired his first 14 batters and delivered a gem a day after 19-game winner Johnny Cueto went down with a back injury, and Cincinnati beat the San Francisco Giants 9-0 on Sunday night to head home with a 2-0 NL division series lead.

In Detroit, Al Alburquerque reached out and snagged a sharp grounder to the mound - then planted a little kiss on the ball before tossing it to first. The relieved reliever gave his Detroit teammates a reason to laugh in ninth inning of a tight game.