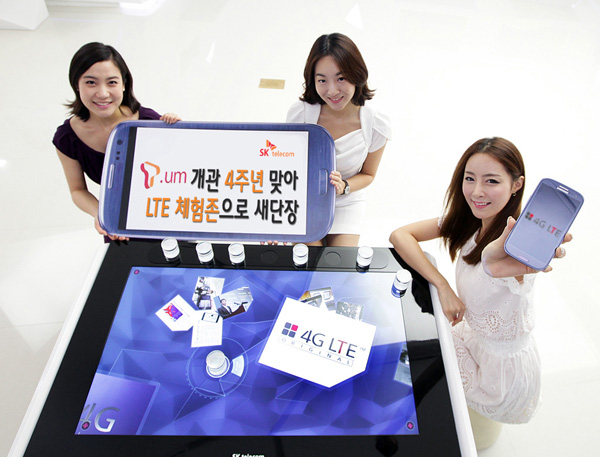 Models promote SK Telecom’s IT museum T.um at SK T-Tower in central Seoul yesterday. Marking its fourth anniversary, the exhibition has been upgraded to include a booth showing the company’s latest LTE technology. Provided by the company


Celebrating its fourth anniversary, T.um, an IT exhibition hall run by top domestic carrier SK Telecom, has revealed its goal to become a global landmark representing the latest in IT technology.

The hall, which is located inside SK T-Tower in Euljiro, central Seoul, now features a booth for long-term evolution (LTE) technology and has renewed several experimental programs linked to fields such as education and medicine.

“We will keep making improvements to turn this venue into the world’s leading IT exhibition hall.”

The venue has risen in prominence internationally since picking up a prize at the Reddot Design Award event in Berlin last year. It was also introduced by CNNGo in May as “Seoul’s mind-blowing future technology museum.”

At the new LTE experimental zone, visitors can see how multicarrier (MC) technology works. This chooses the faster of two frequency bands to facilitate faster LTE communications, thus preventing network overload and optimally distributing mobile data traffic. SK Telecom was the first company in the world to commercialize this in July.

In addition, carrier aggregation, a core LTE technology that doubles data transmission speeds by combining two frequency bands, will be explained through videos. Visitors can also experience the performance of a high-definition voice-installed phone at the exhibition hall. HD Voice is being touted as a next-generation voice call service available on LTE networks

SK Telecom said it is also displaying other high-tech items such as its “Smart Learning” robots, which interact with smartphones, and its “Smart Health” program, a mobile medical treatment system that uses videoconferencing to help provide effective health care services.

The mobile carrier said these upgraded features will attract more visitors and improve the branding of Korea’s IT sector to foreigners.

The exhibition hall has so far attracted over 38,000 visitors from 168 countries, including Julius Genachowski, chairman of the Federal Communications Commission, and Anne Bouverot, general director of the Global System for Mobile Communications Association.

SK Telecom said it is also using T.um as a platform to help low-income families learn how IT developments can improve their children’s education.