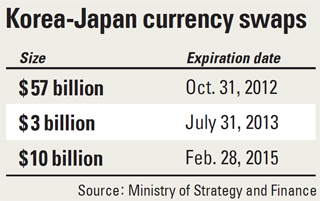 Korea and Japan decided not to renew a $57 billion currency swap agreement that’s due to expire at the end of October after relations soured between the two countries over claims to the Dokdo islets.

“Given the stable financial markets and the sound macroeconomic conditions of both countries, they concluded that the extension of the increase of the bilateral swap arrangements is unnecessary,” read a joint statement released by the Bank of Korea and the Ministry of Strategy and Finance yesterday. “They also agreed that they will cooperate in an appropriate manner as the need arises while closely monitoring the global economic conditions as well as those of both countries.”

In the first eight months of this year, Korea’s current account had a $22.3 billion surplus, while the foreign reserves as of last month stood at $322 billion.

Seoul and Tokyo first signed a $13 billion currency swap arrangement in 2008 to protect both economies from global financial instability, and it extended the swap to $70 billion last year.

When the $57 billion expansion expires Oct. 31, the swap deal will revert to $13 billion, the ministry said.

The finance ministers of the two countries are scheduled to hold a meeting in Tokyo on Thursday.

Analysts say the impact of the currency swap will be limited, especially since Korea’s credit rating has improved and there is abundant liquidity in the global market thanks to the recent quantitative easing by the U.S. Federal Reserve.

The reserve swaps are meant to help countries facing liquidity shortages during times of turmoil.

The ministry rejected the notion that yesterday’s decision was affected by frayed ties between the two countries over Dokdo, the easternmost part of Korea that Japan calls Takeshima.

“It’s not that the principle of separating economics from politics has been broken,” Choi Jong-ku, Korea’s vice finance minister, said in a press briefing yesterday.

“The decision was made purely from an economic point of view. Given Korea’s sound macroeconomic condition and improving sovereign credit trustworthiness, the government decided to end the swap agreement.”

The dispute between Asia’s second- and fourth-biggest economies erupted after President Lee Myung-bak visited Dokdo on Aug. 10, prior to the country’s Aug. 15 Liberation Day holiday, which celebrates the end of Japanese colonization in 1945.

Japan’s Chief Cabinet Secretary Osamu Fujimura said on Aug. 15 that Tokyo was considering a “variety of options” when asked about the currency swap agreements. The comment was considered by experts here to be a response to Lee’s visit to Dokdo.

Japan’s Finance Ministry said on Oct. 3 that it wouldn’t renew an expansion of the agreement if the Korean government didn’t make a request.

Political analysts thought that was a message from Japan that Korea should cool down its rhetoric on Dokdo if it wanted to extend the $57 billion swap deal.