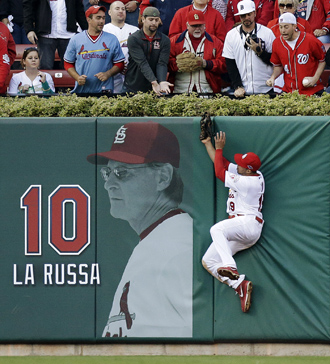 St. Louis Cardinals center fielder Jon Jay leaps at the wall to catch a fly ball off the bat of Washington Nationals’ Danny Espinosa during the sixth inning of Game 2 of the National League division baseball series, Monday, in St. Louis. The Cardinals won 12-4 to even the best-of-five series. [AP/YONHAP]

Beaten 3-2 by the top-seeded Nationals in Sunday’s opener, the Cardinals took control with a four-run explosion in the second inning when David Freese hit the first double of the series before Beltran homered in the sixth and eighth.

“I wasn’t really trying to hit homers right there,” a smiling Beltran told reporters. “I was trying to hit the ball hard somewhere. I got good pitches to hit.

“Against [Mike] Gonzalez, I got a changeup on the inside part of the plate and I was able to stay inside the ball. And the second one was a fastball against a very tough lefty (Sean Burnett) for them. I was able to hit it good.”

Washington starter Jordan Zimmermann, who came into Game 2 with a woeful 9.12 earned run average in five previous matchups with the Cardinals, gave up five runs and seven hits over three innings before exiting.

Though Jaime Garcia allowed just one run and two hits in two innings pitched for St. Louis before making way for 18-game winner Lance Lynn, the Cardinals offense made the biggest difference in front of 45,840 raucous fans at Busch Stadium.

After Zimmermann had singled on a line drive to right fielder Beltran for Ian Desmond to score in the top of the second inning, St. Louis exploded in reply.

The Cardinals padded their lead to 7-1 before Ryan Zimmerman and Adam LaRoche trimmed the deficit by hitting back-to-back homers in the fifth inning.

St. Louis reliever Joe Kelly covered the sixth inning, with considerable help from Jon Jay who pulled off a brilliant leaping catch as he slammed upwards into the center wall to save a leadoff extra-base hit by Danny Espinosa.

“It was a little bit easier to see when the shadows were gone,” said Jay, who also had three runs batted in at the plate. “The ball went up and I got a good beat on it. I just said, ‘Make the catch. Make the catch.’ And I came up with it.”

However, the Nationals still faced an uphill climb. Beltran piled on further misery for them when he powered a solo homer into the third deck above left field in the sixth, then belted a two-run homer on a fly ball to left-center field in the eighth.

“That’s some of the youth in the pitching staff,” Nationals manager Davey Johnson said. “[Zimmermann] didn’t really make a lot of adjustments out there.

“He kind of stayed one way - hard away. [Against] a good fastball-hitting club, you have to use both sides of the plate, and he didn’t really use his slider much early on.”

The best-of-five series shifts to Washington for Game 3 on Wednesday, Game 4 on Thursday and, if needed, Game 5 on Friday.

In the other playoff match on Monday, Baltimore rookie pitcher Chen Wei-yin outdueled postseason maestro Andy Pettitte to guide the Orioles to a 3-2 victory over the New York Yankees and tie their American League Division Series at one game each.

Chen gave up eight hits over 6 1/3 innings while surrendering two runs, only one of them earned, on a chilly night in front of more than 48,000 raucous fans at Camden Yards.

The 27-year-old Chen changed the speeds on his pitches to keep the Yankees off-balance.

“His fastball, it seems to get on hitters quicker than what the speed indicates, and that’s one of his strengths,” said Yankees manager Joe Girardi.