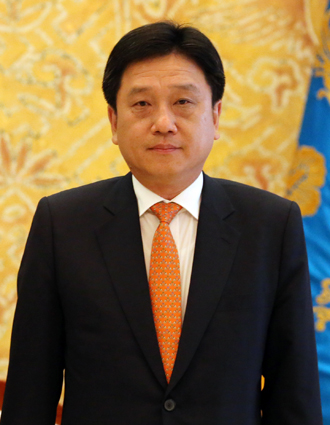 The largest opposition party yesterday attacked the prosecution for not being tough enough during its investigation into the controversial land purchase surrounding President Lee Myung-bak’s retirement home project in order to protect the president and his family.

Choi Gyo-il, head of the Seoul Central District Prosecutors’ Office, dropped a bombshell on Monday by saying that the prosecutors cleared all charges against Lee, his son and Blue House aides after its probe, although an official in charge of the land purchase could have been prosecuted for negligence.

From October last year until June this year, the prosecution investigated a deal to buy a plot of land in Naegok-dong on the southern edge of Seoul for a retirement home for Lee, and auxiliary facilities for security personnel. The land was bought jointly by Lee’s 34-year-old son, Si-hyung, and the Presidential Security Service.

The cost was not shared evenly, however, with the security service paying a higher price for the site to build its facilities. This move, the opposition argued, was a scheme to allow the son to profit from buying the site at a below-market price. Following the criticism, the project was nixed.

“Kim Tae-hwan, a staffer of the Presidential Security Service, was in charge of the land purchase in May of last year,” Choi said during his luncheon with reporters. “Kim had also worked on similar projects for the late presidents Kim Dae-jung and Roh Moo-hyun.”

“What Kim did could have been seen as negligence, but it was hard to prosecute him with the crime,” Choi said, “because the profiteers of the crime, then, would be the president’s family.”

Asked if the prosecutors cleared all charges against the president and other people after its probe because it was burdensome to go after the presidential family, Choi said “Yes,” the reporters who attended the luncheon said.

Two hours later, Choi said what he meant was the prosecution could not indict the responsible official with a negligence charge. “I didn’t mean that we could have prosecuted him, but didn’t,” Choi said.

The Democratic United Party yesterday used Choi’s remarks to attack the prosecution. “Choi finally revealed the truth,” Representative Park Jie-won, floor leader of the DUP, said yesterday. “It is now revealed that the prosecutors conducted a poor probe to protect the president.”