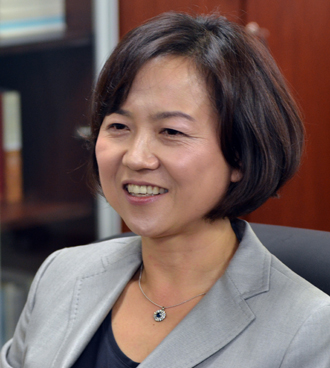 Following criticism that the newly appointed Supreme Court justices were lacking in diversity, a female judge in her 40s was named as a candidate for the last remaining justice spot yesterday.

Supreme Court Chief Justice Yang Sung-tae recommended to President Lee Myung-bak 46-year-old Kim So-young, a Daejeon High Court senior judge, who is not only a woman, but if appointed would become the youngest justice on the current bench.

The three other new justices appointed back in August are conservative men all in their mid- to late-50s with law backgrounds.

If approved by the president after confirmation in the National Assembly, Kim will become the fourth female Supreme Court Justice and the second youngest appointee to date.

Kim’s appointment will bring the number of women back to two out of a total of 14 justice seats. After Justice Jeon Soo-ahn’s retirement in July, Park Poe-young is currently left as the sole female representative on the court.

Four Supreme Court justices completed their terms on July 10, but ferocious debate regarding their replacements led to a nearly month-long vacancy in the top court before Ko Young-han, Kim Shin and Kim Chang-suk were confirmed to the bench in early August.

But because the fourth candidate, Kim Byung-wha, head of the Incheon District Prosecutors’ Office, gave up his nomination after being embroiled in a scandal, the Supreme Court began the process of selecting a new candidate to fill the last vacancy.

The nomination committee drew a short list of four candidates including current judges and prosecutors at the end of last month, and after nearly two weeks of deliberation, Chief Justice Yang nominated Kim.

Back in early June, the initial shortlist of 13 justice nominees drawn up by the nomination committee to replace four retiring ones was criticized by the public for being comprised of cookie-cutter conservatives with the same background, age group and gender.

Since then, both ruling and opposition parties have pushed for the last new nominee to be a woman.

Like most other justices, Kim is a law graduate of Seoul National University and a career judge, with experience in the Seoul Central District Court and the National Court Administration.

A confirmation hearing for Kim will be held soon in the National Assembly.