‘Our Homeland’ a story of repatriation, reunion

‘Our Homeland’ a story of repatriation, reunion

From left: Director Yang Yong-hi and three cast members - Ando Sakura, Iura Arata and Yang Ik-june - were at the Busan International Film Festival for a screening of “Our Homeland.” [YONHAP]


For most people, the word homeland may evoke childhood memories or mellow nostalgia and warm comfort. But for director Yang Yong-hi, homeland is the most intricate concept to define, causing her to continually revisit the theme through her work.

Yang is a second generation Korean-Japanese born and raised in Osaka who has South Korean nationality. Her father was born on Jeju Island and chose to move to Osaka during Japan’s colonial rule (1910-1945). He played a leading role in the General Association of Korean Residents (Chongryon in Korean), an organization that assists North Koreans in Japan with travel or legal issues.

Yang’s father sent his two sons to North Korea in the 1970s - probably lured by propaganda that portrayed North Korea as “a paradise,” she says. A repatriation campaign from the late 1950s into the 1970s resulted in the relocation of an estimated 90,000 people to the North. Yang’s brothers still live there.

Her latest film, “Our Homeland,” is an accurate reflection of Yang’s family history and circumstances and highlights the director’s efforts to prevent the story of those who settled in the North from becoming a “forgotten history.”

“Our Homeland” revolves around Sung-ho (Iura Arata), who migrated to Pyongyang at the request of his father, a senior official of the General Association of Korean Residents. Sung-ho returns to Japan to receive treatment for a brain tumor and is reunited with his parents and sister Rie (Ando Sakura). But their happy reunion is monitored by a North Korean minder (Yang Ik-june), who keeps Sung-ho’s family under constant surveillance.

Having been screened at the 17th Busan International Film Festival, the heartbreaking drama has been nominated in the Best Foreign Language Film category at the 2012 Academy Awards.

“Our Homeland” is Yang’s first feature film. She previously made two documentaries - “Dear Pyongyang”(2006) and “Goodbye, Pyongyang”(2009) - based on what she recorded during her visit to North Korea for a brief meeting with her brothers.

After the release of her documentaries, North Korea denied her request for another visit.

During a press conference in Busan, Yang spoke about how the rejection affects her work. “I always go to bed worrying that my work would affect the life of my brothers in Pyongyang. I choose every single word very carefully.

“But I changed my mind a bit this time. I thought that if I become really famous, which would make my family known to many, [North Korea] will not easily threaten my brothers,” she said with a faint smile. “I am talking like a nice person taking care of my family. But basically, my desire to make a good movie keeps me going. I am an egoist.” 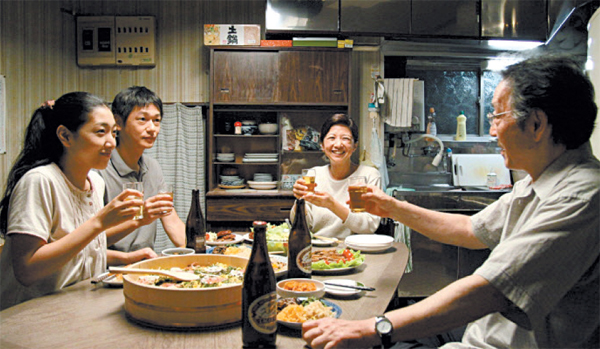 “Our Homeland” tells a poignant story of a Korean-Japanese family that is divided, reunited, then divided again. Provided by BIFF


While the story of “Our Homeland” is similar to Yang’s experience, it is not a documentary.

“When I said goodbye to my brother, I just stood still, watching him leave. So I first shoot like this. But I regretted [what I did] over and over again,” said the 47-year-old director.

“It kept occurring to me, ‘What if I could ever express my sorrow or beg my brother not to go away or even just kick the car that will take him away?’?”

In the first shooting, Rie didn’t react when Sung-ho leaves for North Korea. But Yang later asked the actress to express how she felt about not wanting him to leave.

The director finally shot a scene where Rie holds onto her brother and begs him to stay with them.

“I just performed based on how I felt at the time. Looking back, I should’ve acted more emotionally,” said Ando.

Despite her extensive exploration of the meaning of homeland, Yang seemed confused when asked what the word meant to her personally.

“I can’t wear any T-shirts bearing a country’s flag. I am almost allergic to that. In the movie, homeland is a place, not a specific country,” said Yang. “I chose the word as a title because I also want to search for a place where I can call home.”

As sensitive as the tale can be, she stressed that the movie is not about blame.

“I don’t want to point fingers to anyone. I just thought that more people need to know about the people in North Korea,” she said. “We can’t just go on as if nothing happened.”