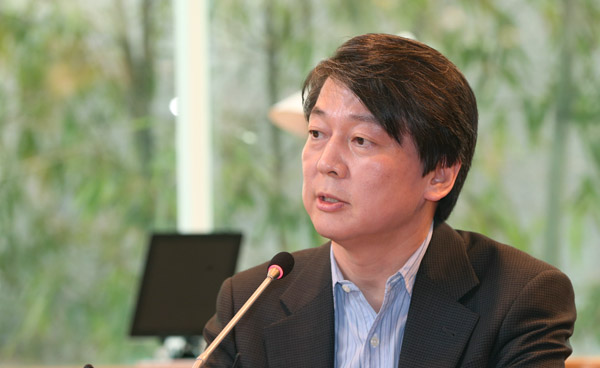 This time, Democratic United Party Chairman Lee Hae-chan is right. On Ahn Cheol-soo’s presidential bid as an independent candidate, he said that the core of modern politics in representative democracy is the political party and it is impossible for an independent president to meet and persuade each of the 300 National Assembly members to manage the national administration.

Lee has been a member of the National Assembly and served in key administrative positions. As an education minister under the Kim Dae-jung administration, he overhauled the education system completely.

And he served as prime minister during the Roh Moo-hyun administration, and President Roh gave him highest praises: “The prime minister is smarter than I am” and “I am a happy president to have a prime minister like him.” He had also served as the chairman of the policy planning committee of the ruling party at the time. So his remark comes from his experience.

Ahn Cheol-soo simply responded that he can serve the presidency as an independent. His spokesman said, “There are existing politicians who are willing to try political reform, regime change, new politics and new changes, and Ahn can do it by integrating their efforts.”

But he did not explain how he will do it. He simply said he can do it. It would be so nice if it could be done just by saying it or having confidence.

It may have been possible in the past, but it’s not any more. Seoul National University Prof. Kang Won-taek said that while the image of an imperialistic president still remains, the reality is very different, and it is evident if you work at the Blue House just for a few days. It may even be possible in the future, but that future has not come yet.

During the Roh Moo-hyun administration, the Blue House surveyed 3,131 proposals in the legislature from 1988 through 2006 because bills were not passed promptly. It took an average of 35 months for a bill to be prepared and enforced. Controversial bills often do not even reach the National Assembly.

Was the Blue House lacking political caliber? A Kookmin University professor and former Blue House policy advisor, Kim Byong-joon, disagrees. In his book, “There is No President for the 99%,” he wrote, “If you blame the Blue House for not giving political funds to the lawmakers, mobilizing the National Intelligence Service or the prosecutors for threats or giving favors, there’s nothing I can say. But the Blue House did everything it can except for those unlawful measures.”

The appointment right, a unique presidential authority, is not as powerful as before. President Lee Myung-bak wished Chung Tong-gi, a nominee for the chairman of the Board of Audit and Inspection, to have a chance to stand in the confirmation hearing.

Ahn’s independent presidency is a step forward from the separation of the party and the government as he is not going to have a ruling party at all.

When it takes great efforts to persuade the ruling party, will it be possible for the Blue House to persuade both parties at the same time? “The determination of the citizens denouncing the politics with only words but no action” may have made him a presidential candidate, but he is likely to become a president who only speaks words instead of carrying them out.

Some say that Ahn is keeping in mind those who do not like both the Saenuri and the Democratic parties. It could be his election strategy. They predict that he would choose a party after he becomes elected as an independent - just like Seoul Mayor Park Won-soon did last year.

In that case, Ahn is not being truthful with the voters. If he truly believes that an independent president is possible, he is a naive man. The point is not how many posts the Blue House gets to appoint, but how the Blue House selects the right talents for the right position.

But he said he would make only one-tenth of the appointments. Either way, it is regrettable.

* The author is deputy editor of political and international news of the JoongAng Ilbo.