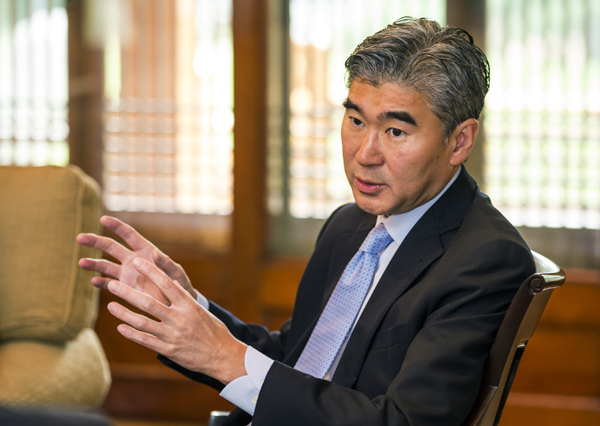 Sung Kim, U.S. ambassador to Korea, speaks in an interview with the JoongAng Ilbo and the Korea JoongAng Daily on Wednesday at his residence. By Kim Seong-ryong


Sung Kim, Washington’s chief diplomat to Seoul, said bilateral relations will remain strong no matter who are elected the leaders of South Korea and the United States later this year.

“What’s important as a U.S. ambassador is the very strong recognition that this relationship is so important that it will not - and should not - be affected by who is in the Blue House and who is in the White House,” Kim said, in an interview with the JoongAng Ilbo and the Korea JoongAng Daily on Wednesday at the ambassador’s residence in Jeong-dong, central Seoul. “I know that in Washington there is very strong bipartisan support for the U.S.-Korea alliance, and regardless of what happens in the elections, I fully expect that we’ll continue to have a very strong commitment to the relations.”

The interview, which was the first of its kind with a local newspaper, was conducted ahead of the one-year anniversary of Kim’s posting as the first Korean-American ambassador to Seoul. Kim, 52, shared his thoughts on a variety of issues as well as some personal achievements over the past months.

Though the six-party talks involving North Korea, South Korea, the U.S., China, Russia and Japan have been stalled since 2008, Kim thinks it still remains a viable forum to discuss North Korea’s denuclearization. The talks were launched in 2003 to find a peaceful resolution to the North’s nuclear weapons program.

Prior to his appointment to Seoul, Kim was special envoy for the six-party talks and also headed the office of Korean affairs at the U.S. Department of State.

“It [six-party talks] has been a viable and useful forum in discussing and addressing a very important concern, which is North Korean nuclear policy,” he said. “I will not give it a death sentence, but I think it’s important that we resume it to produce results rather than all of us heading to Beijing for a painful and unproductive process.”

He dismissed the possibility of the six-party talks being forgotten about.

“It’s the six-party talks, which means, in order for it to die, all six countries should agree,” he said. “No such decision has been made.”

According to Kim, the U.S. is aiming for “complete denuclearization” of North Korea.

“We’re quite concerned about their proliferation activities, but our view - and I believe this is shared by South Korea and other countries in the region and all countries involved in the six-party process - is that they need to completely abandon their nuclear ambitions,” Kim said. “We hope that they realize that if anything, having this program diminishes their security and does not enhance their security.”

The ambassador was skeptical of speculation that North Korea may be trying economic reforms under new leader Kim Jong-un, saying it’s too early to tell.

“We just don’t know enough about what’s happening in North Korea,” he said. “Obviously, it is still very early in his [Kim Jong-un’s] leadership, so it’s difficult to tell whether some of the things that we’re seeing in Pyongyang actually mean a serious effort and commitment to reform and change.”

Kim added that there hasn’t been anything concrete from Pyongyang that would indicate a serious and sincere commitment to denuclearization and other issues of concern to the U.S. and South Korea.

The ambassador sent a message to the North that what’s needed from them is “good faith, sincerity and commitment.

“As President Obama and Secretary Clinton and other senior officials have made clear many times, we remain open to dialogue and engagement in diplomacy, but we want to do it in a way that actually produces some results, not just having meetings just to keep them happy,” Kim said. “We want to see some results, and that requires a much more sincere commitment on their part.”

Kim also talked about growing territorial disagreements in Northeast Asia, including between South Korea and Japan, its two close allies. When asked if the U.S. should take a mediating role, Kim said, “We don’t take a position on the territory disputes themselves.

“I’m not sure if our role is really a mediator between Japan and Korea,” he said. “I do think it’s for the two countries to work out.”

Kim said the U.S. “continues to engage both countries on a wide range of issues, and one of the topics is the relations between the two countries.

“We know that issues like territory disputes and some of the historical issues including ‘comfort women’ are deeply emotional, very serious issues,” Kim said. “And we have encouraged Japan to try to address concerns with its neighbors, particularly South Korea, with regards to some historical issues.”

Referring to the Korea-U.S. Atomic Energy Agreement of which the two countries are expected to negotiate a revision next year, Kim expressed respect for Korea as an ally.

“The nuclear negotiations are ongoing, and we understand that this is very important matter for Korea,” he said. “We’ll continue to have serious discussions and address each other’s concerns in a mutually satisfactory manner.”

The Atomic Energy Agreement was first signed in 1974 and does not allow South Korea to process spent nuclear fuel. The two countries have been in talks since late 2010 for a revision of the agreement before it expires in 2014. Korea wants to be able to reprocess nuclear fuel.

In regards to the negotiations between the two countries on determining Korea’s share of non-personnel stationing costs (NPSC) that will start next year, Kim described the process as “collegial.”

“Even though it involves money, it’s not acrimonious,” he said. “It’s much more a collegial process of looking at the cost and trying to come up with a fair division of the burden.”

Currently, the ratio of Korea’s financial contribution to the NPSC of U.S. troops on the peninsula is 42 percent. There have been reports that the U.S. has requested Korea contribute more because of President Barack Obama’s decision early this year to shrink the U.S. defense budget beginning next year.

“I don’t expect that just because there’s some changes in our defense budget overall there will be some dramatic effect on the process on the division of cost,” Kim said.

“I’m not sure if I have the magic formula for success,” he said. “I think I have been very lucky, and I think diplomacy suited my personality very well.”

Kim encouraged young Korean-Americans and also Korean nationals to work in public service if they have the opportunity as “there is great gratification.

“I always encourage people to think about the possibilities of working in the public sector,” he said.

Kim also suggested young people think globally and have an open mind. “We really do live in a global village, and so whether you go into academia, the private sector or find a job in the public sector, it’s important to have an open mind and global outlook because that will help you handle challenges much more effectively,” he said.

For Kim, coming to the country of his parents and ancestors as the U.S. ambassador is “a huge honor.”

“It’s very difficult to describe in words what it means to me personally and to my family,” Kim said. “The fact that I have such great respect for Korea and great respect for the importance of the relationship between the U.S. and Korea makes that special feeling even more special.”