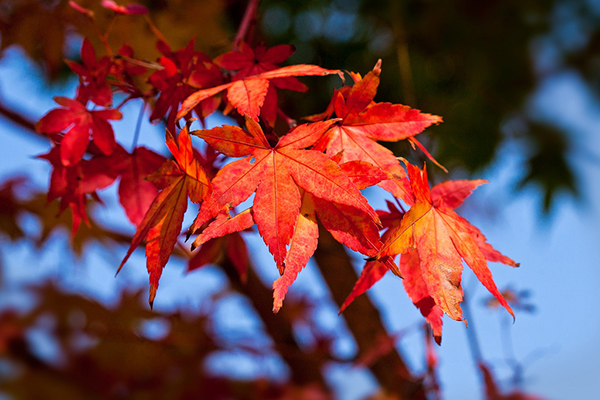 Thinking about a late-October trip to see the autumn colors at Mount Halla? It’s time to stop planning and start packing.

The Korea Meteorological Administration on Tuesday said fall foliage on Jeju Island has already arrived, about six days earlier than usual. Unlike the mainland, Jeju has experienced below-average temperatures this fall, according to the KMA, resulting in ahead-of-schedule autumn colors this year.

Following are some suggestions for where to see the annual show.

Despite Mount Halla being the highest dormant volcano in the country, the mountain’s foliage is not as well known as that of other sites. However, it is worth considering as an alternative to Mount Seorak, Korea’s most popular spot for autumn foliage, which is always jammed with hikers this time of year.

Standing 1,950 meters (6,397 feet) above sea level, Mount Halla is full of lush, primitive forests and wide grasslands. Among the many hiking courses on the mountain, Yeongsil offers the best view of foliage.

The course can be done in about two hours at a leisurely pace. It’s an easy way up to the summit, immersed in the beauty of the colorful leaves. But keep in mind that the descent should begin before 2 p.m. for safety reasons.

If hiking is not your thing, another way to enjoy the autumn colors is to take a drive along Highway 5-16, which cuts across the eastern ridge of Mount Halla and connects Jeju City to the Seogwipo area. Another driving course worth trying is Highway 1100, connecting Yeongsil to Jungmun. 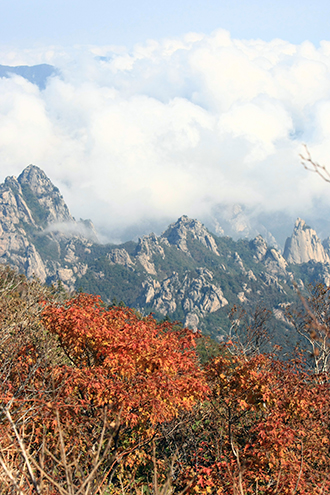 If you don’t mind the steady stream of visitors, head to Gangwon to climb Mount Seorak, the most renowned - and earliest - autumn showcase. Although the colors began to appear early this month, next week will be the peak, when 80 percent or more of the mountain will be adorned in hues of red and gold. The three-hour drive to Mount Seorak makes it a good destination for a day trip. Consider extending it to an overnight and make the climb to Daecheong Peak.

While on Mount Seorak, stop by Biryong Falls, which gets its name from “joyous stream of water tumbling between narrow cliffs.” The feature is said to resemble a dragon rising from the mist. The easy path that stretches 2.4 kilometers (1.5 miles) to Biryong Falls is known as one of Mount Seorak’s most beautiful and romantic courses, and it takes about 50 minutes from Seorak village. If this is not enough, try the steeper Cheonbuldong Valley Course. It takes about four hours to complete, but most hikers say it’s worth it because the unique rock formations and beautiful trees make a stunning combination that can’t be witnessed anywhere else on Mount Seorak.

Another way to get close to the color is taking the cable car for a 1,200-meter ride up to the Gwongeum Fortress at an altitude of 770 meters above sea level. A round-trip ticket costs 5,000 won ($4.50), and the ride takes passengers over Biseondae, Ulsan Rock and Biryong Falls for a bird’s-eye view.

To get there, take a bus to Sokcho from either Dong Seoul Bus Terminal or Gangnam Express Bus Terminal. Then take a city bus heading to Seorak-dong to get to Mount Seorak. For more information, call (033) 636-7700. 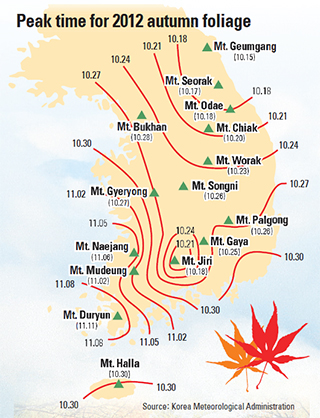 Fans of Korean history might want to take in the autumn splendor from Mount Songni, the home of the Beopju Temple, built fourteen centuries ago in the hope that ancient Korea’s Three Kingdoms would be unified. Scores of people still visit the temple to pray for a unified Korean peninsula.

It is also home to the 33-meter-tall bronze Maitreya Buddha. The temple sits at the foot of the mountain and during the fall the kilometer-long road between the ticket office and temple entrance is transformed into a dazzling tunnel-like path. Wooden buildings and exquisite paintings of the temple harmonize well with the autumn colors.

Trees at Mount Songni usually start turning red after those at Mount Seorak, with peak foliage time anticipated around Oct. 26.

Standing 1,057 meters above sea level, Mount Songni is granite mixed with sedimentary and metamorphic rocks, forming a scenic masterpiece. There are eight peaks, with Cheonhwang Peak being the highest.

To get there, take a bus from Gangnam Express Bus Terminal for Songnisan Terminal. It takes about three hours and 20 minutes. For more information, call (043) 542-5266.

At Mount Jiri, there is no off-season. The mountain is covered with hikers all year round. It is known for having a variety of waterfalls and a deep pond that offer fascinating views for hikers and photographers. Mount Jiri’s most popular course begins at Yeongok Temple and continues along a path down the Piagol Valley and on to Samhongso.

Interested in some culture along with the colors? Wait until Oct. 29 for the two-day Piagol Autumn Foliage Festival, where you can trek the mountain paths before settling down to listen to a classical-music performance.

To get there, take a bus from Seoul Nambu Bus Terminal for Jinju. From Jinju Intercity Bus Terminal, take a local bus for Jungsan-ri. It takes about three hours and 40 minutes. For more information, call (055) 972-7771. 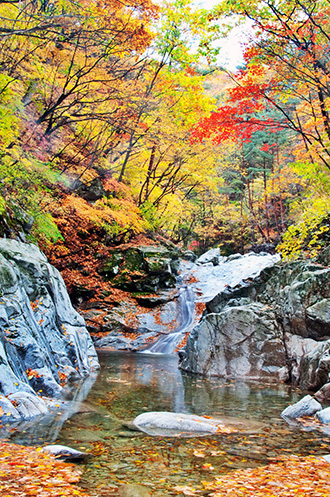 One of Korea’s “eight best sightseeing spots,” Mount Naejang is especially known for having a wide range of colors beyond red, yellow and orange due to its temperate climate. It also is typically the area where the leaves turn latest, usually starting at the end of October and lasting to mid-November.

In addition to several kinds of colorful maple trees in Naejangsan National Park, there are two 1,500-year-old temples: Naejang Temple and Baegyang Temple. The entrance to Naejang Temple is a path under a canopy of red maples, some as old as 200 years. Even the sky looks red from inside this “maple tunnel.”

To get there, take a bus from Gangnam Bus Terminal bound for Sunchang Terminal. It takes about three hours and 20 minutes. For more information, call (063) 538-7875.

Finally, for those who can’t get out of the city to experience Korea’s fall colors, there is always Mount Bukhan in central Seoul. From the base of the mountain, the trail to the peak takes about three hours. It starts out along a creek that it is nearly dry before heading into the forest, where the colors begin to change. However lovely the forest, it’s important to get all the way up to the peak for a 360-degree panoramic view of the city. It is a great spot for a leisurely lunch.