General gets teary about knock-knock defection

General gets teary about knock-knock defection 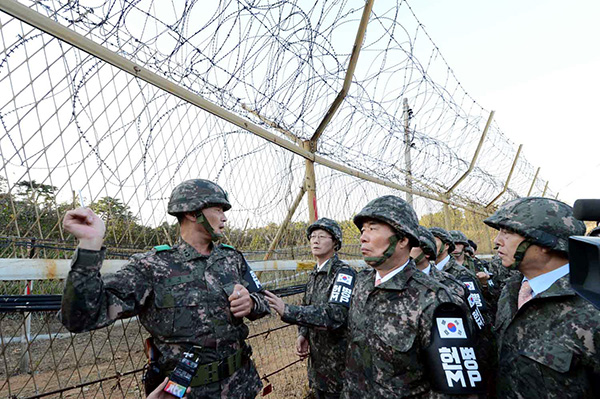 A military official, left, gives a briefing yesterday to lawmakers belonging to the parliamentary defense committee in front of a barbed-wire border fence, over which a North Korean soldier successfully climbed when defecting on Oct. 2. The committee members visited a frontline unit in Gangwon to investigate how the military failed to detect the soldier crossing into the South. [NEWSIS]


The general in charge of border security for the eastern front yesterday vowed to lawmakers that an incident like the Oct. 2 undetected defection of a North Korean solder across the Demilitarized Zone would not happen again and tearfully apologized for the security compromise.

“The military will do its best to prevent an incident like this, which disgraces the group in charge of national defense,” said Park Seoung-kyoo, commanding general of the First Republic of Korea Army, during a parliamentary hearing on the issue in Wonju, Gangwon, near where the defection took place.

Park came close to tears when apologizing for letting the defector slip across the border in what is considered one of the biggest border security breaches in years.

“I feel really sorry for all these men dutifully serving in the Army,” he said, “who have been under growing public criticism over the incident.”

The military is under fire for its failure to detect a North Korean soldier getting past two fences erected by the North and one by the South before he walked up to a South Korean barracks and knocked on its door.

Speculation has also been rising that the higher levels of the military might have tried to cover up or downplay the compromise in security and the full facts about the so-called “knock-knock defection” have not been disclosed.

Lawmakers of the ruling and opposition parties criticized the military and questioned whether it tried to cover up its blunders by disposing of CCTV footage. “We need a thorough investigation to find out if someone deliberately deleted CCTV evidence at the DMZ in an attempt to cover up the failed guard mission that day,” said Representative Kim Jae-yun of the opposition Democratic United Party.

Another DUP member, Kim Kwang-jin, raised speculation that the defector reached the southern barracks at around 8 p.m., three hours earlier than reported by the Ministry of National Defense. General Park flatly denied that speculation.

The four-star general pledged to take follow-up measures to boost readiness on the front line by adding CCTV cameras and boundary lights along the DMZ. “I acknowledge that we were overconfident about our security readiness with the three-fold security fence installations.”

After the hearing, eight lawmakers of the 17-member parliamentary defense committee paid a visit to the frontline unit caught in the controversy and received a briefing from military officials on the events of Oct. 2. They viewed the four-meter (13-foot) South Korean fence over which the North Korean soldier climbed.

The bashing by lawmakers followed the summoning of Minister of National Defense Kim Kwan-jin to the Blue House by President Lee Myung-bak on Thursday.

Lee reprimanded him and said the military had deeply disappointed the people during a 30-minute meeting. Lee urged the minister to thoroughly examine the guarding system and come up with follow-up measures to better secure the border. Lee also called on Kim to sternly punish those responsible for the lax security.

Defections across the land border were considered rare, but this year alone, three soldiers from the North have done so, according to the Ministry of National Defense. An 18-year-old soldier defected last Saturday by dashing across the demarcation line near Kaesong after shooting two of his superior officers.

The defections across the land border have led to speculation that the North’s military, under its new leader Kim Jong-un, is experiencing instability.