N.K. soldier deserted for fear of retaliation from boss: lawmaker

N.K. soldier deserted for fear of retaliation from boss: lawmaker 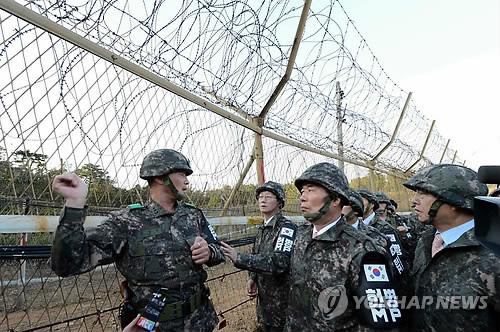 The North Korean soldier who crossed the heavily armed border to defect to South Korea last week has stated that he ran away for fear of retaliation after assaulting his superior, a South Korean lawmaker said Friday.

Jo Seong-jik, commander of the front-line unit where the defector first showed up after crossing the border on Oct. 2, quoted the soldier as saying that, Rep. Kim Jin-pyo of the main opposition Democratic United Party (DUP), told reporters. 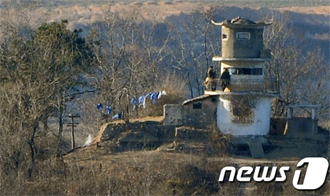 Kim was one of the seven ruling and opposition lawmakers who visited the front-line unit in Goseong, Gangwon Province, to check the border defense system and receive briefings on what happened on the day of crossing as members of the parliamentary defense committee.

The incident has prompted criticism of the military's surveillance capabilities after the initial military report that the North Korean soldier was spotted on a surveillance camera before being taken into custody was proved wrong.

But it was revealed later in a National Assembly audit that the military was unaware of the defector's presence until he knocked on the door of the barracks to tell the troops there he was defecting.

"Lee knocked on the window of a guard post of our military at 11:15 p.m. on Oct. 2, and a staff sergeant surnamed Song who was inside the post heard this," Jo said. "Song then went out together with the chief of the post, took into custody the North Korean soldier who was five to six meters ahead and wrote a report on what happened, sitting him on a chair."

Regarding speculation over the absence of surveillance camera footage from the time, Jo said an investigation by a team of experts found that the camera was not working at the time of the incident and there was no proof of deletion.

There has been speculation the military might have deleted it an attempt to cover up the mistake.

"Traces are left when the taped video is deleted," a military police officer said, adding that the military will keep the surveillance camera for additional investigation by civilian experts.

Though defection across the border is considered rare, two other soldiers from the communist nation have made their way across the heavily armed border this year alone.

Just four days after the Oct. 2 defection, an 18-year-old solider defected Saturday after reportedly shooting two of his officers to death. Earlier, a third North Korean soldier crossed the land border into the South on Aug. 17, waving a white flag, an international symbol of capitulation.

The two Koreas remain technically at war as the 1950-53 Korean War ended in a truce, not a peace treaty. (Yonhap)