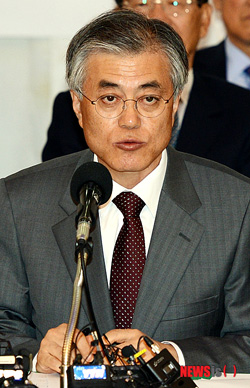 Moon and fellow liberal politicians asked the Unification Ministry for permission to visit the Kaesong Industrial Complex sometime next week to study the latest conditions of the inter-Korean business project as well as South Korean firms operating in the industrial zone.

But the ministry turned down the application, saying it is inappropriate for a South Korean presidential candidate to seek North Korea's approval to visit the complex and that Pyongyang previously rejected a proposal by South Korean lawmakers, citing inter-Korean tensions.

"(Moon) needs to carefully abstain from visiting the Kaesong complex at this point in time, when all conditions are being considered in a general manner," the ministry said in a statement sent to Moon's camp.

"It is desirable that considerations should be paid for the Kaesong Industrial Complex to smoothly continue its production without any political influence," the ministry said.

"We think it is regrettable that the ministry in fact did not permit the visit," Jin Sung-joon, a spokesman for the camp, said during a press briefing.

"The government should reconsider its decision in a forward-looking manner considering the difficulty of inter-Korean relations and management conditions of companies operating in the complex," Jin said.

The complex, established after the first-ever inter-Korean summit in 2000, is the last remaining symbol of inter-Korean cooperation. More than 50,000 North Koreans work at about 120 South Korean factories there. (Yonhap)