Pagoda with no shadow undergoes repairs

Pagoda with no shadow undergoes repairs 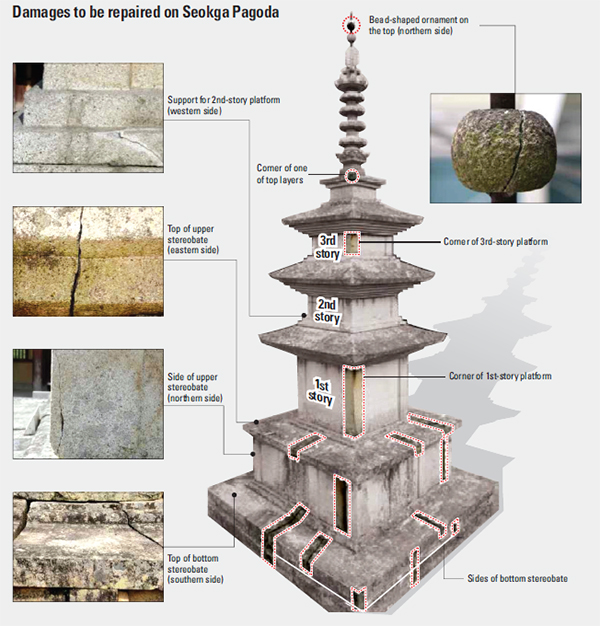 Asadal, a Korean living in the far southwest region of the Silla Dynasty (57 BC-935 AD), was known as the best sculptor on the peninsula. So when the Silla rulers began building a new pagoda in the Bukguk Temple, located in what is today called Gyeongju, they summoned him all the way to the capital.

According to legend, Asanyeo, Asadal’s wife, waited for him to come back home every night. But the wait became so long that she decided to make the journey to Gyeongju herself.

Women were banned from entering the temple grounds until the pagoda was finished, so Asanyeo stayed near the pond outside the temple, hoping to see the shadow of the pagoda, signaling it had been built.

But as time passed, she began to lose faith. She could not wait any longer. Asanyeo took her own life, drowning herself in the pond.

Not long after, Asadal finished the pagoda and learned about his wife’s death. He, too, committed suicide in the pond.

This tale of how the Three-Storied Stone Pagoda at the Bulguk Temple - also known among Koreans as the Seokga Pagoda - has been passed on through generations. The pagoda is nicknamed the “Muyeong Pagoda,” meaning it has no shadow.

For the first time in over 1,000 years, it will undergo a major restoration. The National Research Institute of Cultural Heritage announced on Sept. 27 that it would be dismantling the beloved pagoda to repair damages.

Seongta, the chief monk of the Bulguk Temple, Kim Young-won, the director-general of the National Research Institute of Cultural Heritage, and other high-profile figures from the cultural heritage scene in Korea were standing together on Sept. 27.

On the count of three, a box containing a stone bead-shaped ornament on top of the 8.2-meter-high (27-foot) pagoda came down slowly on the pulley. The ornament - like a star on top of a Christmas tree - has already been taken off by contemporary stone master Lee Eui-sang, who is an intangible cultural heritage.

When the box was opened, the stone ornament inside had cracks throughout. The act of pulling down the decoration marked the beginning of a long journey for the pagoda, Korea’s National Treasure No. 21. The planned restoration is not a series of simple repairs here and there. It’s a full-scale dismantlement and reassembly.

“During the regular safety check-up in December 2011, we found a major crack in the top of the upper stereobate on the northeastern side measuring 1.32 meters in length and 5 millimeters in width,” the National Research Institute of Cultural Heritage said in its report on the upcoming restoration.

That prompted the institute to inspect the damages in general, and realized that significant damage was done to all parts of the pagoda - the top, body and “stereobate” (or the bottommost foundation). Officials said they needed a fundamental solution and agreed on a full-scale restoration.

In particular, the damage to the stereobate was critical. As the pile of stones used to fill the inside weakened and eroded with the passage of time, the stereobate couldn’t handle the 20-ton weight of the pagoda. 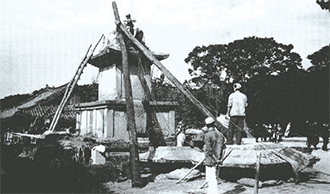 A photo of the Seokga Pagoda under minor restoration in 1966. [JoongAng Ilbo]

“[With the planned restoration] we hope the pagoda will be with us for the next 1,000 years,” said Chief Monk Seongta at the Sept. 27 event.

According to documents found in the compartment within the pagoda for storing sarira - the relics or cremated remains of Buddhist spiritual masters - the Seokga Pagoda was erected in 742.

It is quite simple and minimalist with no carvings along the body nor the stereobate, giving a simple yet solemn feel. Also, the proportions are quite stable and beautiful. It is the oldest pagoda in Korea that used only one piece of stone and later became the prime example for pagodas of the Unified Silla Period.

According to the documents, the pagoda was damaged due to massive earthquakes in 1024, 1036 and 1038 and a large part of it was destroyed as a result, prompting major restoration works.

Also in 1966, robbers tried, but failed, to steal the sarira and that led to a partial restoration of damaged areas. This is the first full-scale restoration since 1038.

“In addition to dismantling the top part, the body and sterobate, we will also conduct an archaeological inspection below the pagoda,” said Bae Byeong-seon, director of the architectural heritage division at the institute.

When the officials conducted a partial restoration in 1966, they found a copy of “Pure Light Dharani Sutra,” the Buddhist text that arguably shows the earliest instance of wood-block printing in the world.

That is why historians are not ruling out the possibility that more important relics might be buried inside or under the pagoda.

“The restoration and inspection will be the largest of this century [in Korea],” Bae added.

The National Research Institute of Cultural Heritage will tear down the pagoda by early next year and the repairs are scheduled to be completed by December 2014.

The pagoda will be surrounded by glass throughout the repair work, so the 2.5 million visitors who visit the temple every year can see the restoration process.

The Bulguk Temple was also restored in the early 1970s and the Hanyang University Museum is holding a special exhibition called “Boundary between Restoration and Creation.”

It depicts just how the restoration of the Bulguk Temple was executed through the testimonies of Kim Jeong-gi, the former head of the National Cultural Properties Research Institute.