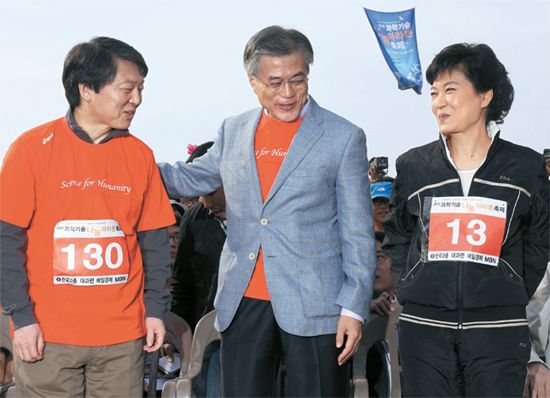 
The three leading presidential candidates gathered in a marathon event on Saturday, the first time for the contenders to appear together for a photo session with the showdown only two months away.

Rep. Park Geun-hye of the ruling Saenuri Party, Rep. Moon Jae-in of the main opposition Democratic United Party and Ahn Cheol-soo, an independent candidate, showed up at the marathon event held at World Cup stadium in western Seoul as part of their campaign over the weekend.

It was the first time the candidates have turned up in front of the cameras since they announced their bid for the December race, though they just exchanged greetings as a courtesy during the event.

The candidates have been gearing up their campaigns in the past week, churning out pledges on economy, welfare and national security to woo voters in the close race.

Many analysts say Ahn, the founder of South Korea's largest anti-virus software firm, and Moon will have to join forces and field a single candidate between them to defeat Park, the daughter of late President Park Chung-hee, but it is not yet known if, how and when they will make
an agreement.

Ahn has been more critical of the current conservative government and is thought to be more liberal. To raise chances of becoming a unified
candidate, Moon stressed that a candidate affiliated with a party is more qualified to become a president than an independent and can handle the legislative process to fulfill campaign promises better in parliament. [Yonhap]