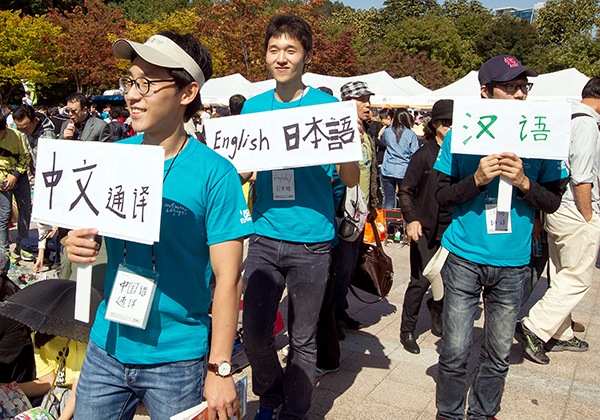 University students volunteer to provide interpretation service in Chinese and English at the flea market yesterday.

Balloons, music and a lottery for children heightened the festive atmosphere of the eighth annual WeAJa charity flea market yesterday, hosted by the JoongAng Media Network and held in four cities nationwide simultaneously.

This year, the large-scale market was a big success by all accounts, drawing about 440,000 visitors and vendors in total, the largest number since the market started, organizers said, to four locations: Sangam World Cup Stadium in Seoul; Boramae Park, Daejeon; North Jeolla Provincial Government office building in Jeonju; and Bexco, near Haeundae Beach in Busan. Approximately 700 volunteers took part in the charity festival, including 500 individuals, and 200 company officials and NGO members.

The proceeds from the four markets, about 138 million won ($124,000), will be donated to underprivileged children supported by We Start, a charity organization run by the JoongAng Media Network. 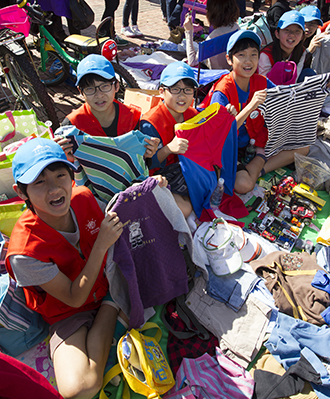 Members of the environmental preservation club Eco Millennium of the Hwasu Elementary School in Goyang, Gyeonggi, sell used goods at the market. The children will donate the profits to a friend who is suffering from leukemia. By Kim Seong-ryong

After a highly-charged performance by singer John Park, the opening ceremony was marked by a brief speech from Nam Sun-hyun, the president of JTBC, who said “Charity makes the nation, the economy and the family stronger.”

As soon as his speech ended, attendees let loose a flurry of white balloons.

“I just got some jam, which is really good,” Aaron Wadsworth, an American from Chicago who has lived in Seoul for 10 years, said. “It’s my first time to come here, but I think it’s good because it raises money for charity.”

“We came here to sell donations provided by expatriates in Seoul,” Lee Seong-ok, a Seoul city government official said. “Some expatriates even sell their goods by themselves, at a stand provided by the Seoul Global Center.”

In the Seoul market, one major interest for visitors was the open auction, where people can buy luxury or rare items offered by celebrities or high-ranking government officials.

When President Lee Myung-bak’s Air Force jumpsuit came out, tensions rose as two men started a bidding war. The winner eventually got it at 700,000 won, and he said that he just “wanted to get the rare item.”

A number of donations were auctioned off at high prices: the white shirt and black tie from rapper Psy sold for 250,000 won; the autographed necklace of popular Korean gymnast Son Yeon-jae went for 250,000 won; and a set of handmade ceramic tea cups donated by Kwon Jae-jin, minister of justice, which sold for 1 million won.

The highest valued item was a white ceramic bottle donated by Lee Hee-ho, the former first lady and wife of Kim Dae-jung, which sold for 3 million won.

For civic organizations and companies, it was a good chance to promote themselves to thousands of visitors. A mothers’ association to help kids fight computer game addiction sold their clothes and handbags with a banner promoting their association, while a group of activists for green growth provided a free painting service for visitors who brought their own T-shirts.

An Shin-ja, a 51-year-old CEO of Sunyang, said she and her employees gathered about 1,000 books and clothes to donate to this market.

“For this event, many of our employees donated their own items for a year,” she said.