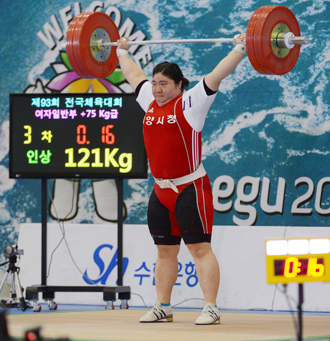 Jang Mi-ran, the 2008 Olympic gold medalist, lifts 121 kilograms (267 pounds) in her third clean attempt, winning the +75-kilogram women’s final of the National Sports Festival held in Daegu yesterday. Jang, who represents Goyang City at the competition, also won two other titles yesterday - one in the jerk, lifting 155 kilograms, and the other in the clean-jerk combination. It is her 10th consecutive sweep of the three titles in the +75-kilogram class at the country’s annual sports competition. Jang, who won a silver medal at the 2004 Athens Olympics, finished fourth at the 2012 London Olympics after struggling with injuries. Now 29, Jang told reporters yesterday that she has yet to make up her mind regarding retirement. “I haven’t had sufficient time to think about that,” she said. The 93rd National Sports Festival features 24,160 athletes from 17 regional governments including many who represented Korea at the London Olympics. [NEWSIS]