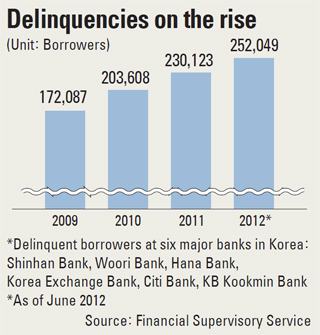 The debt crisis continues to grow as the number of delinquent borrowers rises.

The number of delinquent borrowers spiked nearly 50 percent in June compared to three years ago when the U.S. financial crisis affected Korea, according to data by the Financial Supervisory Service submitted to Democratic United Party Representative Chyung Ho-joon in an ongoing parliamentary inspection yesterday.

The data showed the number of delinquent borrowers at six major banks - Shinhan Bank, Woori Bank, Hana Bank, Korea Exchange Bank, Citi Bank and KB Kookmin Bank - increased to 252,049 as of June this year, up 46 percent from the 172,087 recorded in 2009.

In Korea, a person is automatically registered as a delinquent at the Korea Federation of Banks after failing to pay back loan payments for over three months. 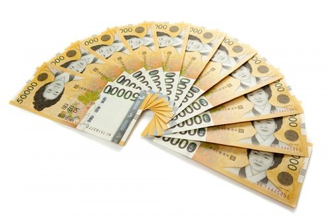 Despite the Lee Myung-bak administration’s attempts?to curb the nation’s snowballing household debt, delinquents have been rising for four straight years at a rate of between 20,000 and 30,000 per year.

“Some people have a hard time these days due to the fall in real estate prices, but the pain for people who have borrowed under 10 million won [$9,000] to pay education and medical fees is even greater,” Chyung said during the parliamentary inspection yesterday.

“The number of credit card borrowers on default will get bigger if we include credit card units run by banks, which make up 30 percent of the credit card market,” Chyung said.