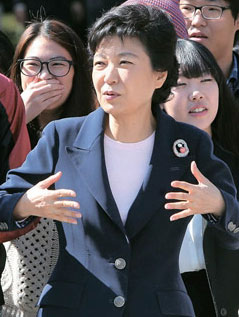 Park Geun-hye, presidential candidate of the ruling party and daughter of the late strongman Park Chung Hee, said yesterday that she will soon address the controversy surrounding a scholarship foundation established during her father’s authoritarian rule.

The scandal involving the Jeongsu Scholarship Foundation, established with confiscated assets of a Busan-based businessman in 1962 and chaired by the Saenuri Party candidate for 11 years until 2005, has emerged as the latest Achilles’ heel in her campaign.

As the liberals attacked Park for her ties to the foundation, which has refused to return its wealth to the original owner, she has long insisted that she has nothing to do with it since she no longer chairs the foundation.

“Neither I nor the opposition party has any right to tell them what to do,” Park said Monday.

She, however, is expected to take a step to resolve the issue, as her campaign has been laden with historical baggage from her father’s era.

“I will soon make my position public,” Park said yesterday, when asked if her position remains unchanged despite the recent development in the controversy.

Local media reported about an alleged conspiracy between the foundation chair Choi Phil-lip and two MBC executives to sell the foundation’s stake in the broadcaster to benefit Park’s campaign.

Demands also grew strongly from inside the Saenuri Party that Choi must step down from his post to lessen Park’s political burden. Choi, however, resisted the pressure.

“I am not working for an institution under the Saenuri Party,” Choi told the JoongAng Ilbo Tuesday. “They have no right to tell me what to do. I am not a member of the party, nor is the foundation a political group.”

Asked what he will do if Park asks him directly to help her, Choi said, “It’s not something she would ask my help in. It has nothing to do with her.”

Choi was a secretary for Park in the Park Chung Hee Blue House. Although she no longer chairs the foundation, the Democratic United Party argued that she is connected to it through Choi. It remains to be seen if Park will ask Choi to step down when she addresses the issue in the near future. Last month, Park indirectly called for him to step down by saying “the true intentions of the scholarship foundation and the board of directors were tainted, so it is my personal wish that the board members make an appropriate decision.”

“Choi must step down voluntarily and a neutral person should be appointed,” said Ahn Dae-hee, head of Park’s political reform special committee.

Representative Shim Jae-chul, a vice chairman of Park’s campaign, also said, “I am making a polite request to Choi to step down.”

Kim Yong-kap, a senior advisor of the Saenuri Party, went even further. “Park cannot remain silent anymore,” Kim said. “She should put stronger pressure on him to resign.”

The liberal opposition DUP yesterday said it will initiate a National Assembly hearing and investigation to look into the scandal involving the scholarship foundation.

Representative Yun Kwan-seok, a spokesman of the party, said yesterday that the DUP held a lawmakers’ assembly and made the decision.

“The party has decided to counter the Jeongsu Scholarship Foundation and MBC’s illegal support for Park’s presidential campaign,” said Yun.

“Our lawmakers also demanded Park speak about her position clearly and apologize, instead of insisting that she has nothing to do with the foundation, created with looted assets, chaired by her for more than a decade and receiving 1.1 billion won [$995,429] in salary.”