UN chooses Incheon as home to its ‘green bank’

UN chooses Incheon as home to its ‘green bank’ 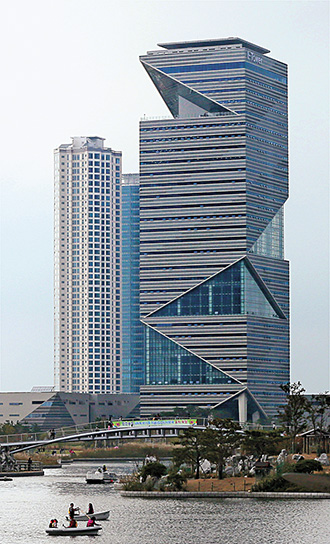 Fifteen floors of the 33-story I-Tower building, right, in the Songdo International Business District, Incheon, were offered free of charge to the United Nation’s Green Climate Fund and will be home to its secretariat. [YONHAP]

The secretariat of the GCF will be set up in the Songdo International Business District in Incheon. It will be the first major international organization to choose Korea as its home, and the country is expected major economic benefits and increased international prestige.

The 24 board members of the Green Climate Fund voted Saturday at a board meeting in Songdo. At the end of November, Songdo will be officially endorsed as the home of the GCF headquarters at the 18th session of the United Nations Framework Convention on Climate Change in Qatar.

The 190-member GCF, referred to as the environmental sector’s World Bank, was established in 2011 to help fight climate change by funneling money from developed to developing countries. The idea was first brought up in December 2010, when developed countries decided to create a fund to support developing countries in fighting climate change. The total fund to be operated by the GCF in its first year, 2020, will be $100 billion and it will rise to $800 billion in 2027, sources said.

“The GCF organization will steadily expand in the future and it will have more and more affiliated groups as well,” President Lee Myung-bak told the press on Saturday.

“I think it’s a bliss to people in Korea,” Lee added. “For the first time in our history, we will host one of the biggest international organizations in our country.”

Kim Sang-hyup, senior presidential secretary for green growth, said that the GCF could grow into an organization bigger than the IMF or the World Bank if “GCF members will raise the money as promised annually.”

One of the reasons for Korea winning the contest was President Lee’s passion, Blue House officials told the JoongAng Ilbo. At the G20 summit in Mexico and the Rio+20 Earth Summit in Brazil, Lee appealed that Korea host the GCF secretariat.

After the appeal, Lee reportedly sent letters to 21 core members of the fund and made phone calls to board members. He also appeared in a video clip promoting Korea as a host and attended a reception of the GCF board members before the voting.

Expectations are rising for great benefits coming to the Songdo district, which is in the western area of Incheon and is close to the Incheon International Airport.

The debt-ridden Incheon City Government has been struggling to manage its special business districts near the airport, including Songdo, due to difficulties in attracting foreign investments.

“We expect the hosting of the GCF to trigger a ripple effect on the local economy,” Song Young-gil, mayor of Incheon, said at a press conference Saturday. “The effect can’t be compared to hosting an Asian Games because a sports event is just a one-time occasion, while the GCF secretariat will be here for the next 100 or 200 years.”

Song also quoted a report by the state-owned think tank Korea Development Institute, which says the economic effect of housing the GCF headquarters will be roughly 380 billion won ($344 million) annually to the country.