Smartphone use rampant in schools

Smartphone use rampant in schools

Recess used to be a time for kids to run and play between classes.

However, during lunch break on Oct. 5 at a 1,100-student middle school in Nowon District, northern Seoul, only five or six students were playing soccer.

Clusters of students were instead gathered by the bleachers next to the soccer field, crouched over their smartphones. 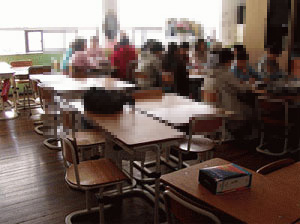 Likewise, inside the school, the hallways were mostly bare save for students heading to the bathroom or the cafeteria. Most students were huddled in their classrooms, faces lit by the LED screens of their smartphones.

Only their fingers were in rapid motion over their phones as they engaged in SNS messaging or games.

The boys were mostly engaged in popular game apps such as the construction game Minecraft. The only sounds were the boys’ groans and short outbursts of “I’m doomed” or “Do it again.”

The girls were silent, chatting with friends on KakaoTalk or playing games like Anipang, the popular puzzle game with exploding animal icons.

A second-year female student said, “It’s easier to message my friends even if they are in the same classroom as me.”

“Until two years ago, during break time, the hallways and the soccer field were crowded with students running around,” said a 48-year-old teacher at the school surnamed Han.

“But these days most of them stay in their seats and are absorbed by their smartphones.”

There are more than 30 million smartphone users in the country. As smartphone use becomes more rampant in society, students too are becoming inseparable with their smartphones.

The Korea Communications Commission said that 67 percent of children between 5 and 19 are smartphone users as of June. That is a tenfold increase since 2010 when 7.5 percent of kids used smartphones.

The Ministry of Public Administration and Security reported the percentage of youth smartphone addicts at 11.4 percent this year, surpassing that of youth Internet addicts at 10.4 percent.

These students can barely be torn away from their smartphones during class time, let alone break time.

In the middle school in Nowon District, of a class of 35 students, around three-fourths of the class had a smartphone.

Four in 10 students responded in a survey conducted by the JoongAng Ilbo of 85 students in the school that they have “secretly used their smartphone during class.”

“Though I know it is wrong, I keep checking my smartphone because of curiosity during class time,” said a 15-year-old male student surnamed Kim of the school. “If it’s not in my hand, I feel nervous and restless.”

But teachers wage a futile battle against students’ smartphone usage as students find wily ways to use their phones in class.

A 47-year-old teacher surnamed Kim at a high school in Yangpyeong, Gyeonggi, caught a student sending a text message in class and confiscated the smartphone.

Kim related that the student responded, “I didn’t use the phone,” then began swearing before he smashed his smartphone on the floor. To the teacher, the student stated, “I was going to change to a new phone anyway, so take it.”

Last year, a high school junior in Daegu wielded a knife against a teacher for confiscating his phone.

One teacher at an all-girls high school in Bupyeong District, Incheon, confiscated a student’s smartphone because she was secretly texting with KakaoTalk during class.

But the student’s father called the school stating, “It’s our method of checking our child’s safety to and from school, so how can the teacher arbitrarily take the phone away?”

Some students go to school with older traditional cell phone models in case the teacher inspects their bags or demands their phones before class.

The high school teacher from Bupyeong said, “During class time, I collect all the student’s phones but many students hand in their old cell phones and still use their smartphone in class.”

And there is increased strife in classrooms when teachers confiscate cell phones.

A middle school teacher in Bupyeong District, Incheon, said, “There was a case when the confiscated phone stored in the teacher’s office disappeared, and I had to apologize to the parents and pay the full cost of the phone of 800,000 won [$724].”

Since then, the teachers at the middle school avoid confiscating phones all together. Some teachers try to compromise with their students.

One high school teacher in Gyeonggi promises his students if they can spend half an hour phone-free during the 50-minute class, for the remaining 20 minutes they will be allowed to use their smartphones.

“It’s the only way to avoid a ‘hide-and-seek’ situation with smartphones during the entire class.”