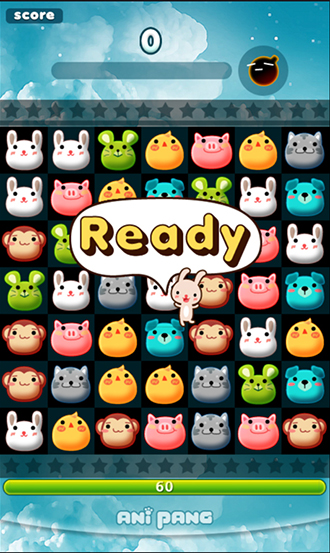 The office manager of the editorial writers room is “Anipang Master.” She scores over 300,000 points on the popular game easily. Park Yong-hoo, director at Anipang, says that even the employees there score 170,000 to 200,000 points, adding that she must have many friends to exchange hearts and have skills to set off bombs with many combos. Last week, a friend from college in her late 40s said that she was also into the game. She thought that it would be the last game she would play but became completely hooked. She is begging for hearts and has upgraded her smartphone for better game-play. She has even persuaded her husband to share the fun, yet she hasn’t been able to score higher than 100,000 points.

Anipang has become a national phenomenon. The easy-to-follow rules and cute characters have attracted more than 20 million users in three months. It has become a n?ationwide playground where more than three million smartphone users get online at once and play an average of one hour a day. Some players are using cheats. They install auto-play programs on their computer and easily score more than a million points with a few clicks of the mouse. Whenever Anipang releases updates, the company works hard to prevent cheaters from exploiting the game.

In Anipang, you play a one-minute round and have to wait 8 minutes for the hearts to get replenished. Park said it was a humanist rule to prevent game addiction and encourage an exchange of hearts with friends while waiting for another round. However, you become competitive with your friends, and some impatient people think 8 minutes is too long to wait. If you don’t want to bother your friends and beg for hearts, you end up paying 100 won ($0.09) for each heart.

The company sells an average of 200 million won worth of hearts a day, and last week, the daily sale peaked at 350 million won. It’s a great hit. KakaoTalk, a mobile messenger program that charges Anipang for using its service, is also thrilled. KakaoTalk’s Lee Soo-jin said the company was finally making a profit as the free texting service was guzzling money.

However, the bright light casts a dark shadow. The portal sites are very nervous as KakaoTalk and Anipang are thriving. Naver has successfully caught up with Google by promptly releasing smartphone applications. But the smartphone screen is so small that it is hard to insert the search advertisement, which makes money. Search is the main function of the Web, but in the world of smartphones, communication is king. As the Internet environment rapidly shifts from computers to mobile devices, the trend is a disaster for portals.

I am paying attention to a social network game “Dragon Flight.” The game play is very intense. It has fewer users than Anipang, but Dragon Flight’s daily revenue is more than 500 million won. The game was created single-handedly by Kim Min-gyu, the president and only employee of Next Floor. He developed the program while the design and the sound were done by specialists. For an SNS game, the developer usually gets to take home about half of the revenue. At this rate, Kim alone will be able to make a profit comparable to selling a midsized company.

But it is doubtful if the success stories of the three companies will sweep the world. Their success in the niche market was propelled by the network providers that charge high fees for text messages. American communications providers have changed fee plans based on data usage. Voice calls and text messages are nearly free. Another risk is the rapidly changing global trend. Zynga, the pioneer in social network games, once had market capital of 10 trillion won, but the stock price plummeted by 70 percent this year.

Nevertheless, newly founded mobile companies are recklessly challenging the market. KakaoTalk and Anipang are proud that people are not using their services just because text messaging is free and they like games. They claim that SNS has become a culture. As SNS establishes itself as a mobile platform, it has only begun to show its business opportunities.

Lately, presidential candidates make fancy promises to create jobs, offer welfare and democratize the economy. But they need to learn from the emerging mobile industry. Good jobs and solid and healthy small and midsized companies are not created by the government but are born from fresh ideas and pioneering spirits.