World Baseball Classic mixes it up

World Baseball Classic mixes it up 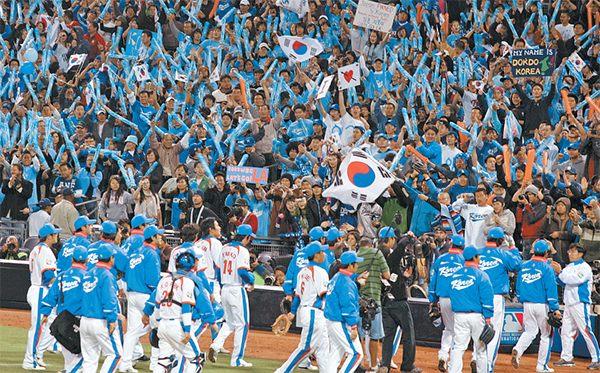 In this file photo, Team Korea walks off the field after beating Japan 4-1 in a second-round game held at Petco Park in San Diego on March 17, 2009, during the World Baseball Classic. Korea lost 5-3 to Japan in the final held at Dodger Stadium in Los Angeles on March 23. JTBC has landed exclusive broadcasting rights to the biggest international baseball tournament. [JoongAng Ilbo]


The World Baseball Classic has altered its tournament format in a bid to become more international by dissolving regional groups and having teams compete in stadiums across the globe.

During the 2009 event, Korea competed against other Asian countries in the first round before advancing to the second round held in the United States, a format that saw as many as five Korea-Japan rivalry games.

In the upcoming event, the regional groups have been dissolved and a new system similar to the FIFA World Cup will be implemented.

Pool C brings together Venezuela, Puerto Rico and the Dominican Republic while Pool D will see the United States play Mexico and Italy.

The last team in each group will be decided after the qualifying stage is complete in mid-November. Spain and Canada have already clinched spots in the tournament but are awaiting group placement.

Colombia, Brazil, Panama and Nicaragua will compete for one of the last two spots in Panama while Taiwan, New Zealand, the Philippines and Thailand will play against each other in Taiwan for the final ticket.

In March, when the WBC tournament begins, the two top teams in each pool will advance to the second round of eight teams. These eight teams will be divided into two separate groups.

If Korea advances to the second round, it will compete in a double-elimination format in Tokyo between March 8-12.

The four winners from Pool C and Pool D will compete in the other second round group in Florida from March 12-16.

The two best teams in each pool in the second round will then advance to the semifinals and finals in San Francisco to be held between March 17-19.

Korea is looking to advance to its third straight semifinals.

According to officials of the Korea Baseball Organization yesterday, the technical committee of the country’s governing body of the sport drafted a 50-man shortlist for Team Korea.

“The technical committee members, led by chairman Kim In-sik, has made a preliminary roster for the WBC,” Jeong Geum-jo, the head of baseball operations for the KBO, told the JoongAng Ilbo.

Jeong said the manager, who has yet to be named, will finalize the preliminary roster.

Under KBO guidelines, drafted after the 2009 WBC, Team Korea will be led by the manager of the Korean Series winner from the year before the event is held. That means either the manager of the Samsung Lions or SK Wyverns will get the honor. Both teams are currently playing in the Korea Series.

The final roster will be announced in late January, Jeong said, ahead of the deadline for submission to the WBC.