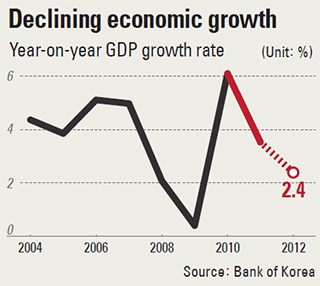 The ruling Saenuri Party’s presidential candidate, Park Geun-hye, has a plan to shift the focus of her campaign from a populist pledge of “economic democratization” to a massive stimulus package, the JoongAng Ilbo has learned.

With forecasts for the economy getting gloomier, strategists in the conservative ruling party have decided to adopt what they call a “two track” economic pledge. The centerpiece will be a 10 trillion won ($9.1 billion) economic stimulus plan for next year should Park win the presidential election.

“We will soon make a pledge to create a 10 trillion won spending plan for 2013,” a party official on Park’s so-called People’s Happiness Committee told the JoongAng Ilbo Tuesday.

Headed by Kim Chong-in, the committee is in charge of the economic planks of the Park platform. Previously, its key theme was economic democratization, which is code for welfare pledges and anti-chaebol policies. But a so-called powerful economy team under the committee has drafted a stimulus plan, according to the source. The plan is awaiting Park’s final approval. 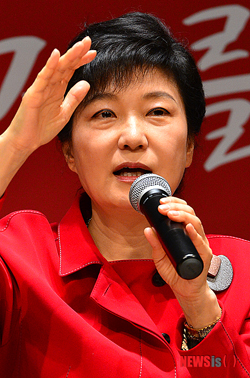 Largely backed by the conservatives, Park has failed to differentiate her economic pledges from liberal rivals Moon Jae-in of the Democratic United Party and independent Ahn Cheol-soo. All three have promised more economic democratization, or narrowing of the wealth gap.

“Because all three were going after centrist voters with economic democratization slogans, their pledges were all similar,” the committee source said. “The time has come for Park to clearly state her own direction.”

A stimulus package of 10 trillion won, about 1 percent of the gross domestic product, is a very new direction. A macro policy to boost the economy would also be a sharp contrast with the micro policies Park and the liberal candidates have promised previously.

While some analysts said a stimulus plan could be seen as walking away from the economic democratization campaign, an aide to Kim denied that.

“We will present a comprehensive policy on economic democratization and growth strategy before the end of this month,” the aide said.

“To put out the urgent fire of economic depression, we need a stimulus package,” Professor Kim said. “We can push forward economic democracy and find new growth engines only after salvaging our economy from a Japanese-style recession expected to come next spring.”

Others, however, said a stimulus plan is an emergency stopgap measure, not a policy pledge. Critics said Japan has adopted similar measures repeatedly in the past but saw no clear benefit.

Through the planned stimulus, the Saenuri Party seeks to achieve both short and long-term effects. Strategists said the package will bring about 27 trillion won worth of economic effects. The short-term effect will be worth 5.5 trillion won, while household debts nationwide will be reduced by 300 billion won by improving the economic situation of the middle class, they said.

The package includes short-term financial assistance for owners of small and medium businesses and also aims to revitalize the sluggish real estate market. Investment in public infrastructure projects is key to reviving domestic demand. Under the plan, massive investments are planned in public schools, libraries and senior citizen facilities nationwide. The plan also includes work on concrete reinforcements of hillsides that are prone to landslides as well as upgrades of sewage systems.

Those plans have raised concerns about the nation’s fiscal health. The 2013 budget plan, in fact, is focused on maintaining fiscal soundness. Adding an additional 10.1 billion won in spending will be a big change.

Some analysts, however, said Korea is capable of handling a large stimulus package.

“The current fiscal soundness is good, so if it is 1 or 2 percent of the GDP, the government can implement a stimulus package despite the deficit,” said Prof. Lee Young, who teaches economics at Hanyang University. “Right now, there is a great need for a stimulus package and the fiscal condition is not bad.”

Meanwhile, the National Election Commission said yesterday that presidential candidates have made public lists of their top 10 pledges via its Web site. Each candidate also presented a road map to realizing the pledges, including information on how they will be financed.

A total of six candidates registered their pledge lists with the commission as of yesterday.

Economic democratization was still the top priority on Park’s list, along with creating a Korean-style welfare system and political reform.

Moon of the DUP made a jobs “revolution” his first priority, while also citing welfare and economic democracy. Independent Ahn also listed economic democratization as his top priority. The people’s right to a job and education are also cited.

Lee Jung-hee, candidate of the Unified Progressive Party, vowed to scrap the Korea-U.S. free trade agreement as her top priority, along with a vow to bring happiness to 99 percent of the people by dismantling the chaebol, which she considers Korea’s “1 percent.”