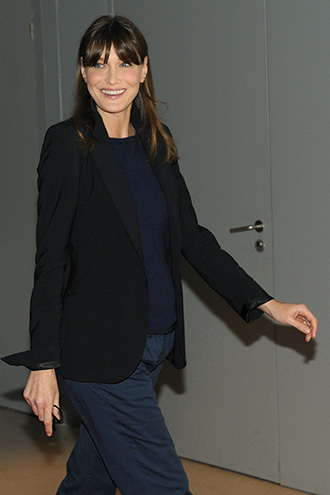 France’s first lady Valerie Trierweiler would make her life a lot easier if she stopped living out of wedlock and became a “legitimate” wife: that’s the simple advice from her ex-supermodel predecessor Carla Bruni.

Bruni delivered her words of wisdom in an interview with Elle magazine’s French edition in which she also said she thought it highly unlikely her husband, Nicolas Sarkozy, would ever return to politics.

Bruni’s right-wing husband had to leave Elysee Palace in May after he was beaten in elections by the Socialist Francois Hollande, who has been in a relationship with Trierweiler for several years but has not married her. “I think it is more simple to be the legitimate wife of the head of state than to be his companion,” Bruni told Elle in its edition to be published Thursday.

“Maybe I’m wrong and their choice is modern. But for my part, I felt a real easing of the general concern about me when I married Nicolas,” said Bruni.

Asked to comment on the speculation that her husband might attempt a political comeback, she replied: “His return seems improbable.”