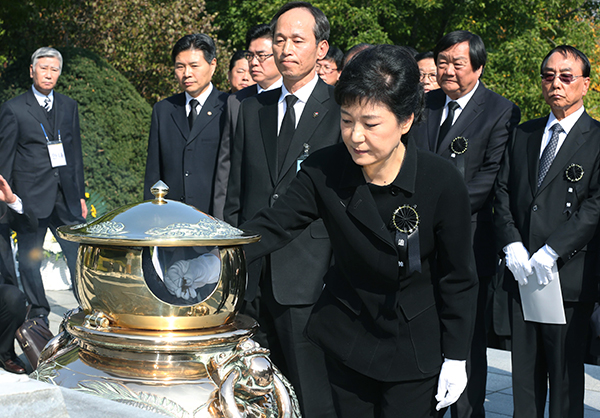 
At a memorial service commemorating her father’s assassination in 1979, Saenuri Party presidential candidate Park Geun-hye asked the people to “let him go,” and she once again apologized for his autocratic rule.

The 60-year-old candidate attended the ceremony to mark the 33rd anniversary of the shooting of President Park Chung Hee by his spy chief, held at Seoul National Cemetery.

“It is now time to let my father go,” Park said. “The people can enjoy all the accomplishments made in his era, and I will take all the mistakes from that time on myself.”

The weakest part of Park’s presidential campaign has been her comments about her father and his dictatorship. Although she is constantly apologizing, she has repeatedly misstated facts about some of the more controversial parts of his rule from 1961 to 1979.

In her speech yesterday, Park underscored that her father was a humble leader.

“My father was a leader of a poor and weak country,” she said. “He had to bow his head before other leaders and asked them for financial aid for the nation. He shed tears watching people building highways and factories with their own blood and sweat.

“For him, to rescue the nation from poverty was the top priority and his main philosophy,” she said. “I sincerely apologize to all of the people who suffered in the process of that.”

On Oct. 26, 1979, the late president was shot and killed by one of his closest aides, Kim Jae-gyu, chief of the Korean Central Intelligence Agency, at a dinner in a safe house in central Seoul.

A group of former aides to late President Kim Dae-jung also appeared at the ceremony for the first time. Kim and his associates fought the Park dictatorship.

Park didn’t mention the Jeongsu Scholarship Foundation, which has become the Achilles’ heel of her presidential campaign. The foundation was a product of the dictatorship, and Park, who once ran it, has had trouble describing its history credibly.

On the same day, the two other major candidates in the presidential race also went to cemeteries.

“There were many independence activists trying to restore the nation during colonial rule,” he told reporters. “But I still feel sorry for them because we haven’t cleared up all the problems regarding pro-Japanese people after liberation.”

He left a message in the visitors’ book that read, “I will remember history and learn from it.”