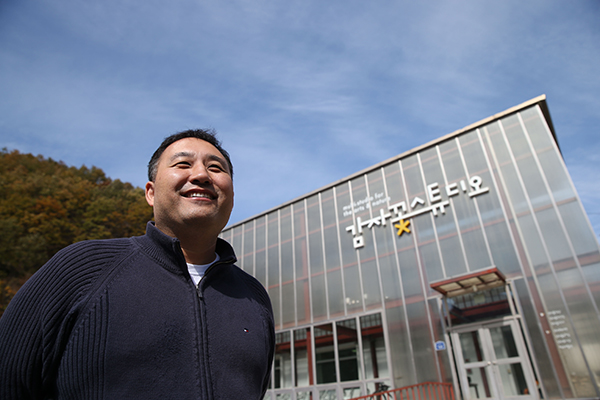 Lee Sun-chul, founder of the Potato Blossom Studio Center, smiles in front of the cultural center that he renovated from an abandoned school in Pyeongchang County, Gangwon. The renovated building holds various cultural events for local residents. By Shin In-seop


has been 10 years since I moved here, and for my work throughout those years, I was awarded by the County Office for my contribution to regional development, which makes me very proud,” says Lee Sun-chul, the brains behind the transformation of an old school into a center for cultural activities in Pyeongchang County, Gangwon.

The Potato Blossom Studio Center has emerged as the premier place in the region where locals can enjoy playing samulnori, traditional Korean percussion music, and watch performances by local and national celebrities.

After the full renovation from an abandoned building into the beloved arts center, companies from Seoul have visited the site to learn from the community and replicate the project.

“Before the school was closed in 1999, it was the elementary school every resident here went to,” the cultural director says.

“If the project were different and sought to use the property for profits rather than the community, people would have felt a sense of loss.

“It was easy to notice that locals at first were very curious and wary about what I was going to do with the school.”

Before coming to one of Gangwon’s mountainous counties in 2002, Lee worked as a planning director for the Kim Duk-soo Samulnori Team for 10 years, and also directed concerts for renowned vocalist Lee Seung-hwan and a rock group Jawoorim.

Lee decided to move to the countryside in Gangwon because of his deteriorating physical condition.

“It’s not something I am proud of saying - my weight once reached around 110 kilograms [242 pounds] from drinking and eating too much meat,” he says, adding that his habits led to a stroke.

“During my first year here, I lost over 30 kilograms thanks to a vegetarian diet and hiking.”

Lee’s passion for cultural events continued in the small town as he earned funds from the Ministry of Culture, Sports and Tourism to buy musical instruments and invite musical lecturers during his first few years.

With the instruments and lectures, Lee began to teach traditional Korean music to students of all ages.

“I did not expect to teach the music to high school students as they are busy studying for college, but thanks to help from teachers, we even formed a band called the Daeil Band composed of high school students. The active musical experience among students prompted adult residents to participate in musical activities, too.”

Lee’s continued and tireless efforts for the residents earned him the trust of the local government. The Pyeongchang County Office purchased an abandoned school and granted Lee the rights to renovate the building in 2004. The 46-year-old asked Prof. Lee Jong-ho of the Korean National University of Arts to help with the project.

“To those who plan to return to the countryside after living in the hustle and bustle of cities, I recommend they bring with them the expertise they have to make contributions to local communities.”