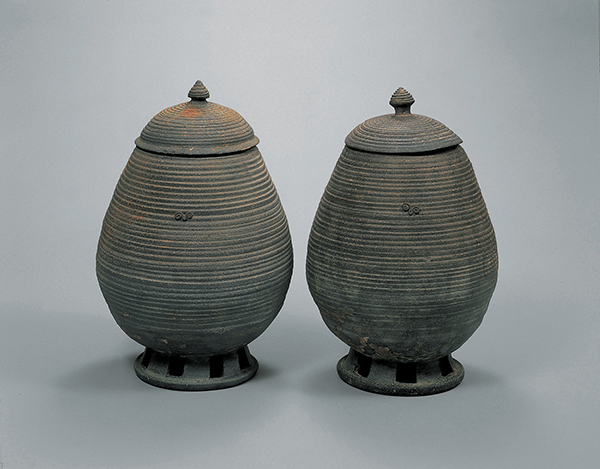 Lidded jars with stands from seventh century are among the Horim Museum’s most renowned artifacts.


On Dosan Road in Sinsa-dong, southern Seoul, a building resembling comb-pattern earthenware stands out among the towering skyscrapers and posh restaurants. The conspicuous Horim Art Center, which houses the Sinsa branch of the Horim Museum, is a bold reminder of the growth of one of Korea’s elite private museums. 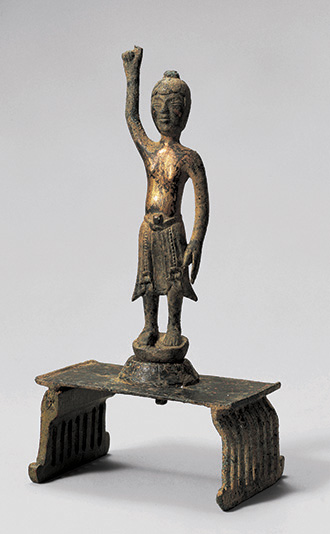 A gilt-bronze “Standing Buddha at Birth” from the sixth century, National Treasure No. 808, is on display at the Horim Museum.

The Horim began 30 years ago in a small property in Daechi-dong, southern Seoul. Today it has grown into a museum with 15,000 artifacts including 54 state-designated cultural properties.

In celebration of the 30th anniversary of the museum’s founding, the Horim on Oct. 18 kicked off a special exhibition showcasing the most renowned artifacts in its collection.

The Horim is one of the few private institutions in Korea that has all the ingredients needed for an elite museum: State-of-the-art technology, a source of stable and continuous funding, and the ability and determination to continue to buy highly sought after artifacts.

The man behind the scenes who made it all possible is Yun Jang-sub, the chairman of the Sungbo Cultural Foundation (Horim is Yun’s pen name). A renowned art collector in the early 20th century, Yun is the only living witness of the museum’s long narrative. He accumulated his wealth through trading firm Sungbo Industry and a chemical firm Sungbo Chemical, and has funneled much of his funds into the arts.

In celebration of the 30th anniversary, the museum has also published a book that details Yun’s collections, establishment of the Sungbo Cultural Foundation and Horim Museum, and his handing over of the rights to the artifacts to the foundation so that more people could appreciate them.

Yun, who is 90 years old, made a rare appearance at the Oct. 18 press event and even held a short question and answer session with reporters for the first time. He had previously turned down all requests for interviews, but he seemed particularly overjoyed and overwhelmed by the special exhibition and book, through which people can share the joy and difficulties he had experienced while collecting the art for the past 40 years.

Asked what kind of moments were the happiest of his life as an art collector, Yun said, “Moments like now - when we are sharing with the world the artifacts we love.” 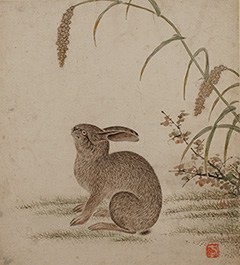 “Rabbit” by Choe Puk (1712-86) from the 18th century is part of the 30th anniversary exhibition at the Sinsa branch of the Horim Museum. Provided by the museum

The exhibition titled “Horim, a Promenade Through the Forest of Cultural Heritage,” is divided into three sections. The first, dubbed “National Treasure Designated by the Government,” displays state-designated cultural properties. The second section, called “Masterpieces: Celebrities’ Choices,” showcases 30 items selected by 30 scholars, professors and experts in Korean art, history and cultural properties. The final section, called “Treasures that Horim Loves,” displays items that Yun has a special attachment to and fond memories of.

One item not to miss in the first section is the Buncheong flask with sgraffito lotus and fish designs - National Treasure No. 179. Buncheong ware is a ceramic type produced during the first 200 years of the Joseon Dynasty (1392?1910), known for a relatively coarse gray body in various shapes and a green-tinted semi-translucent glaze.

In the second section, which is certainly the meat of the exhibit with many choice artifacts, making it hard to pick just a few, the earthenware pieces stand out. Horim’s selection of earthenware is well-appreciated in art circles and is part of the reason behind the design of the Sinsa branch.

Pieces of white porcelain from the Joseon Dynasty are also notable, and they are bound to change previous notions that they are not as elegant and precious as the celadon from the Goryeo Dynasty (918-1392).

Meanwhile, “Celadon Gourd-shaped Lidded Ewer with Inlaid Willow, Reed, Lotus and Bamboo Design” is one of the highlights of the third section.

“After I purchased this celadon from Yang Yeong-bok, an ancient art broker, in May 26 of 1971, my life as an art collector began,” Yun reminisces in the book. He added that he really appreciated the beautiful and fresh shape of his first purchase and continued to buy from Yang.

“Continuous financial support and a discerning eye are crucial for a private museum,” said the honorary chairman of the Korean Museum Association, adding that Horim Museum is a rare museum with both.

“Along with Hoam and Kansong, Yun protected our country’s cultural properties. If you want to run a museum, you should do it like Yun.”

* The Sillim branch is also holding a special exhibition “Appreciation of Memories” which wraps up the past special exhibitions at the Horim. Admission is 4,000 won. Hours are between 10 a.m. and 5 p.m. It is closed on Saturdays and Sundays. Go to Sillim Station, subway line No. 2. People can view both exhibitions for 8,000 won.