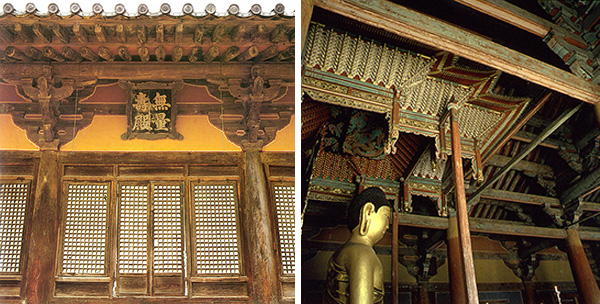 
The Buseoksa Temple located on Mount Bonghwang was built by High Monk Euisang in the 16th year of King Munmu (676) of the Silla Dynasty (BC 57-AD 935). It is where he taught the Avatamsaka Sutra, one of the Buddhist holy books.

Legend has it that a woman who adored Euisang studying in Tang of China transformed into a dragon and flew to this area. Then she defeated 500 thieves hiding in the area with a rock, which fell behind the Muryangsujeon Hall, carving the word buseok (floating stone). The rock is still in the area.

Muryangsujeon Hall was constructed as the main hall of the Buseoksa Temple. The hall was rebuilt in the second year of King U (1376) of the Goryeo Dynasty (918-1392)and paintings of the traditional colorful patterns were added to the building during the reign of King Gwanghaegun (1608- 23) of the Joseon Dynasty (1392-1910). An Amitabha Buddha is enshrined on the western wall of the hall and it is placed by the side of a Buddhist shrine, unlike those in other Buddhist temples. Muryangsujeon Hall is the second oldest wooden building in Korea next to Geungnakjeon Hall in the Bongjeongsa Temple in Andong also in North Gyeongsang. This hall is regarded as a standard building in the study of architecture and formality of ancient Buddhist shrines in Korea.