The complexity of U.S.-China ties

The complexity of U.S.-China ties 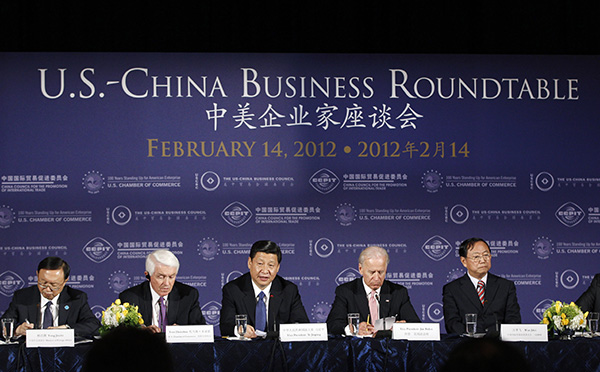 Fashions come and go, but blaming China for America’s economic ills during an election campaign is holding strong. What’s likely to sustain, as well, is the relative calm that prevails with respect to U.S.-China relations after the election.

China, as a topic, was predetermined by the moderator but, even if it hadn’t been, it would have come up, as part of Romney’s strategy to say, as often as he can, that he’ll declare China a “currency manipulator” on his first day in office. Romney does this to make Obama look too cozy with China, and attempts to cast himself as being better prepared to stand up to the second largest single economy.

As China’s status grows as a world power of consequence, and U.S. dependence on trade with it multiplies, candidates seek to tap into Americans’ uneasiness over the two countries’ ties. But China, as Romney may learn, and Obama already realizes, is simply too important to America for either man to follow through on the tough talk.

History bears this out. In 1992, Bill Clinton blasted Chinese leaders as “butchers of Beijing,” because of their violent response to pro-democracy demonstrators gathered at Tiananmen Square three years earlier. But, as President, he pushed to grant China “Most Favored National” trade status for the first time, affording them lower tariffs on exports and more liberal trade rules than they would otherwise have received. Four years later, George W. Bush criticized President Clinton for being too easy on China. He then proceeded to deepen trade relations during his two terms as President.

Romney is, presumably, tearing a page out of Bush’s playbook, attacking Obama’s record in dealing with China. Romney charges the White House with failure to retaliate for Beijing’s alleged manipulation of its currency, which he claims wins it an export advantage and steals American manufacturing jobs at the same time. Romney attacked China directly on a lack of protections on intellectual property, a complaint echoed by major American corporations, which are required to set up operations in China, only to have trade secrets stolen, they claim.

President Obama, in turn, has toughened his administration’s stand on trade disputes with China. It filed trade complaints over auto parts with the World Trade Organization. The president also cited national security concerns as the reason for ordering a Chinese company to divest its shares in wind farm projects near a Navy testing facility in Oregon.

Meanwhile, another national security concern, the growing U.S. national debt, has focused Americans’ concerns about China even more. China leads a list of countries that together hold up to a half of the U.S. government’s outstanding debt. Interest costs to Washington could consume almost 10 percent of the economy by 2035, unless Congress enacts policy changes.

But, the reality of the relationship is more nuanced than American voters are hearing from their candidates. As the two largest economies in the world, the U.S. and China together are vital to the global economy, linked through their extensive trade with each other. Economic malaise in the U.S. (along with trouble in Europe) hurts China, which for the first time in years is seeing growth below 10 percent. In turn, China’s slower economy will hurt U.S. corporations right when they are expanding their operations there.

What’s more, U.S. businesses are concerned that Chinese leaders may overreact to President Obama’s recent moves and retaliate with a trade war that raises tariffs on U.S. good and services in China. Remember, General Motors actually sells more cars in China than anywhere else in the world, including the U.S.

Both countries are trying to adjust their dependency on each other. China wants to achieve economic growth through the strengthening of its own consumers, and depend less on exports to the U.S. and the rest of the world. The U.S. wants greater access to that growing consumer base for its companies.

Both the U.S. and China would rather work with each other than confront each other to get to where they want to go. The relationship between both countries can be summed up in a recent statement U.S. Secretary of State Hillary Clinton issued on China’s National Day: “China is good for America and a thriving America is good for China.” Nevertheless, the perception of rivalry between Beijing and Washington won’t go away soon, and certainly not on the campaign trail.

* The author is a CNN anchor and chief business correspondent.