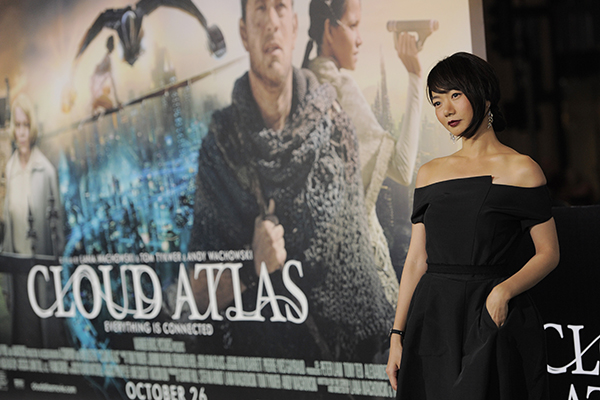 
The movie “Cloud Atlas,” in which Korean actress Doona Bae starred with Hollywood big-names such as Tom Hanks, Halle Berry and Hugh Grant, opened in North America on Friday. Bae participated in at the premiere of the film at Grauman’s Chinese Theatre in Los Angeles on Wednesday.

The nearly three-hour movie consists of six stories set between 1849 and 2346.

Reviews have been mixed. Roger Ebert gave the movie four of four stars, saying, “What a demonstration of the magical, dreamlike qualities of the cinema.”

But the Associated Press review slammed the movie as “laughably self-serious” and “a bloated, pseudo-intellectual, self-indulgent slog.” Still, AP praised the episode in which Bae starred as “the most engaging tale” among the movie’s episodes. According to the AP, the tale is “set in the gleaming, futuristic city of Neo Seoul, a place of detailed, totalitarian precision built atop the remnants of a flood.”

“Cloud Atlas” will be released in Korea in January.