Who’s that on the cover of Billboard?

Who’s that on the cover of Billboard? 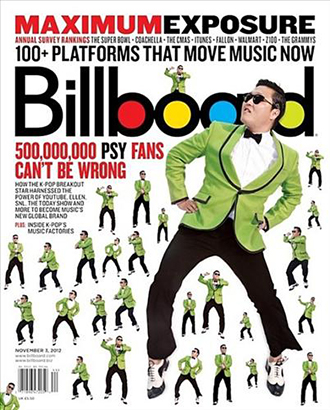 Psy has landed on the cover of Billboard magazine. The magazine, to be sold from Nov. 3, touched upon the popularity of “Gangnam Style” with the headline, “500,000,000 fans can’t be wrong.”

The feature on Psy uncovers how he shot to fame by “harnessing the power of You Tube.”

To date, the 34-year-old has maintained No. 2 on the Billboard chart, trailing Maroon 5’s “One More Night.”

Currently in the United States to work on his next hit, Psy has been interviewed on various TV shows, such as “The View,” hosted by Barbara Walters.

On the Oct. 25, Psy showed Walters how to do the “horse dance,” and had the studio in stitches.

On the same day, Psy appeared on CNN and answered questions about his next project and how he feels about being in the spotlight.

“It’s going to be sung half in Korean and half in English,” said Psy about his next song, although he was certain it couldn’t top his current hit.

The week before, Psy was in Australia where he appeared on the singing-audition show “X-Factor.”