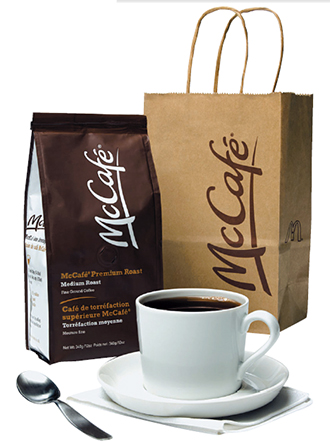 This undated image provided by McDonald’s shows bags of ground coffee the chain will start selling at its restaurants in Canada next month, a move that could spread to other regions around the world if successful. [AP/YONHAP]

McDonald’s will start selling bags of its ground coffee in major Canadian stores next month, it said Thursday, in a likely challenge to rivals like Starbucks, Dunkin’ Donuts and Tim Hortons.

The McCafe-branded coffee, priced at 6.99 Canadian dollars ($7.02) for 340 grams (12 ounces), is being launched as McDonald’s steps up its expansion in Canada after holding back for more than five years.

Representatives for McDonald’s said they were not aware of the company selling bagged coffee anywhere outside Canada.

Earlier this month, market watchers noticed McDonald’s had filed with the U.S. Patent and Trademark Office to use its McCafe brand for “ground and whole bean coffee.” Some speculated that the company might launch bagged coffee in the U.S. market.

Speaking in an interview, McDonald’s Canada President John Betts credited the coffee business for a turnaround at his unit and said there was the potential for a much larger footprint across the country.

“This year, we’re going to build more restaurants than we’ve built in the last seven or eight years,” he said. “Next year, it’s going to ramp up from that.”

Around 30 new stores will open by the end of 2012, Betts said. He did not give specific figures for future periods. McDonald’s has about 1,400 outlets in Canada.

Coffee is not an obvious point of entry in Canada, where Starbucks is ubiquitous and doughnut and coffee chain Tim Hortons borders on a national symbol. But between McDonald’s coffee push and Tim Hortons’ expanding lunch menu, the two chains are increasingly going head to head.

A U.S. spokeswoman for McDonald’s said this is not the first time McDonald’s has sold bagged coffee, but did not offer other examples.

Betts’ upbeat message stands out against last week’s earnings release, when McDonald’s reported its worst quarterly restaurant sales growth in nine years thanks to tough competition in the United States.

All the Canadian stores will give out free takeout coffee next week, Betts said, the eighth round of that promotion, which the company has also run in some U.S. stores.

In the company’s home market, fast-food players are dueling for customers with aggressive promotions, and bagged coffee and similar products have become a significant line of business.

In Starbucks’ fiscal year ended Oct. 2, 2011, bagged coffee, bottled drinks and coffee served in hotels and offices accounted for $1.06 billion of its $11.70 billion in overall revenue.

Still, Bernstein Research analyst Sara Senatore said a McDonald’s entry into the bagged coffee market would not necessarily shake up the U.S. market.

“It’s a different price point, flavor profile, and customer” than Starbucks, she wrote in an e-mail. “The others may be closer in flavor profile but again, [Dunkin’s] business seems to have held up well in the face of [McDonald’s] entry into specialty coffee.”