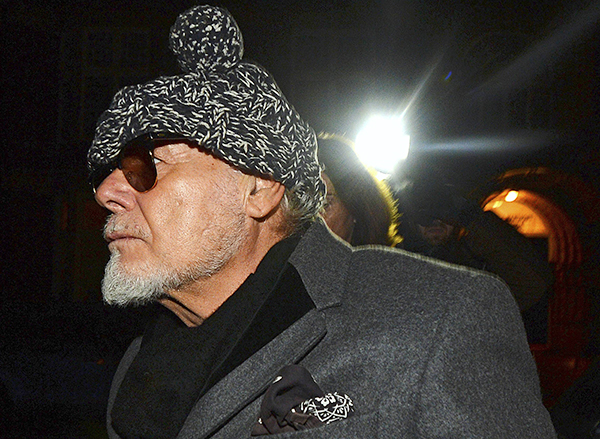 Glitter was released on bail 10 hours later. But the arrest - the first to be reported in the case - widened a scandal that has already damaged the reputation of the publicly funded BBC and the legacy of Savile, a former DJ who was one of the broadcaster’s top hosts and a prolific charity fund-raiser.

The head of the BBC’s governing body said on Sunday the broadcaster’s reputation was on the line and promised to get to the bottom of the scandal.

A police statement said a man in his 60s had been picked up just after 7 a.m. on suspicion of sexual offenses in the investigation termed “Savile and others”. It did not name the man, and a spokesman declined comment.

The BBC and Sky News identified the man picked up from his London home as Glitter, a 68-year-old who was popular as a glam-rock singer in the 1970s.

Footage on both broadcasters showed Glitter, who was wearing a hat and sunglasses, leaving an apartment in central London and being driven away. Hours later, television showed investigators carrying large black bags as they left the house.

Glitter was held by police for about 10 hours. He was seen leaving a police station in central London and, minutes later, returning to his apartment, where he dodged questions by scores of waiting reporters and cameramen. Police later said the man was “bailed to return to the police station in mid-December 2012.”

Glitter served two months in jail in Britain in 1999 for possession of child pornography. He then moved to Cambodia, but was deported in 2002 due to suspected sex offenses.

In 2006, a Vietnamese court convicted him of committing obscene acts with two girls aged 10 and 11 and sentenced him to four years in jail. On his release, he returned to Britain.