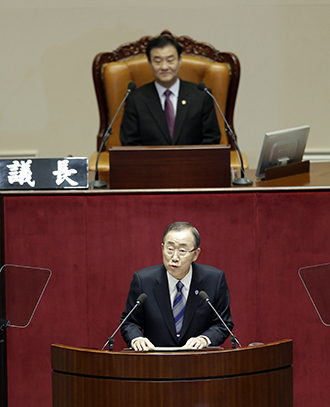 United Nations Secretary General Ban Ki-moon speaks to lawmakers at the National Assembly in Yeouido, western Seoul, yesterday. Ban said that he is considering a visit to North Korea “if conditions allow.” Ban was on a four-day trip to his home country to receive the Seoul Peace Prize. [YONHAP]

United Nations Secretary General Ban Ki-moon said yesterday he is mulling a visit to North Korea as part of efforts to promote peace on the Korean Peninsula.

“As the UN secretary general, I am ready to play every role required to promote peace on the Korean Peninsula. I will consider visiting North Korea as soon as conditions are met,” Ban said in a speech during a National Assembly plenary session.

Stressing the serious circumstances North Korea is facing, the UN chief, who served as South Korea’s foreign minister before being elected as the eighth secretary general of the United Nations in 2006, urged his home country’s parliament to play a leading role in helping the neighboring country.

The UN chief began a four-day trip to his home country Sunday, during which he was awarded the biennial Seoul Peace Prize, becoming the first South Korean to receive the award that was established in 1990 to commemorate the success of the 1988 Seoul Olympics.