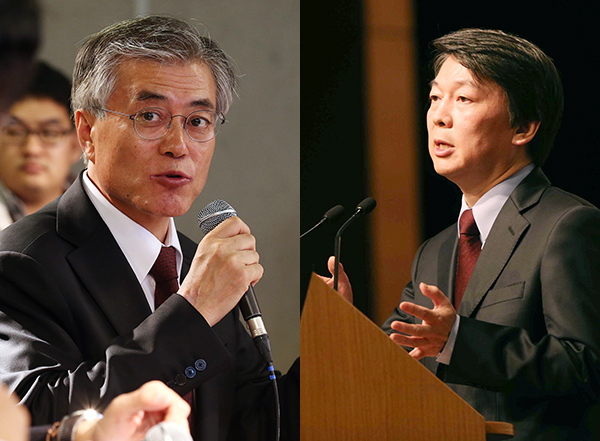 
The campaign of Moon Jae-in, presidential contender of the Democratic United Party, is getting impatient for negotiations to decide who will be the liberal candidate in the election: Moon or independent Ahn Cheol-soo.

But Ahn is playing it cagey, saying he intends to have that discussion to pick a united candidate but sees no need to rush.

“We need to begin the discussion now,” Woo Sang-ho, chief public affairs official of Moon’s campaign, said yesterday. “November is coming quickly. We want to ask Ahn formally how long he wants to delay the talks.”

It is widely expected that Moon and Ahn will negotiate to choose a single candidate to unite liberal votes against the ruling Saenuri Party’s Park Geun-hye. The candidate who stands down will be rewarded in some way, such as being promised the prime minister job.

“To pick one candidate before the candidate registration [on Nov. 25 and 26], the negotiation should progress by mid-November,” Woo said. “And it takes time to reach an agreement and implement the decision no matter what progress is made. We must have a negotiation on specifics as late as next week in order to complete the process before the registration deadline.”

Ahn, however, made clear that he has no intention of hurrying.

“I am not saying that I won’t consolidate the candidacy,” Ahn was quoted as saying by his spokesman Yoo Min-young. “But we have promised to present policy pledges by Nov. 10. So we must keep that promise first.”

According to Yoo, Ahn made the remarks in a meeting with his campaign officials on Monday. Previously, Ahn had mentioned no specifics about the negotiations, so Ahn will be ready to talk with the DUP after Nov. 10.

Ahn’s delay may be intended to preclude a runoff vote between the two candidates. Ahn’s camp would prefer the candidate be chosen by a public opinion poll instead. Moon is at an advantage in a runoff because of the organizational power of his party, the largest opposition party.

Ahn has no party.

Using a public opinion poll to decide a consolidated candidate was the method in 2002 between Chung Mong-joon and Roh Moo-hyun on the eve of the presidential election. Roh beat Chung in the poll and eventually won the presidency against conservative front-runner Lee Hoi-chang of the Grand National Party, the predecessor of the Saenuri Party.

According to a Monday poll by Realmeter and JTBC, Ahn was backed by 42 percent of respondents to be the consolidated liberal candidate, while Moon scored 38.1 percent.

The Saenuri Party is getting worried that the public’s attention is entirely focused on the liberals and their choice of a candidate, denying its own candidate of attention.

“Moon and Ahn must reach a conclusion quickly so we can escape from this black hole that absorbs all other issues in the election,” said Kim Moo-sung, head of Park’s campaign. “If they keep delaying the process, the people will push both of them into the black hole.”

Other senior officials, including Secretary General Suh Byung-soo and spokesman Lee Sang-il, said Moon and Ahn were conducting a wasteful confrontation to dominate the campaign headlines. Suh called the move a conspiracy to split power behind closed doors.