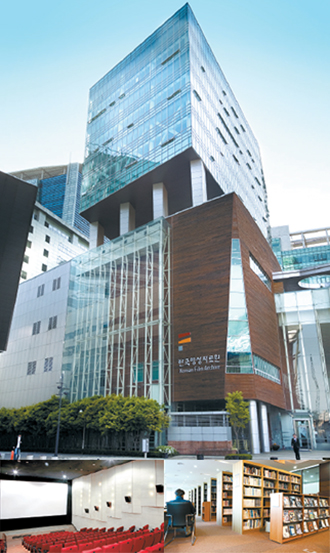 The Korean Film Archive, located in the Digital Media City in northwestern Seoul, is a home to independent films in Korea. It has three theaters including one focused on independent films. At the library, bottom right, the visitors can see DVDs and read books and scenarios. Provided by the KOFA

Director Kim Ki-duk, winner of the Venice Film Festival’s Gold Lion award for “Pieta,” deplored the domination of commercial films in Korea. With growing interest in non-commercial films, however, independent film houses are slowly sprouting across Seoul. At first, the trend began due to government investment, but citizens are also joining in on the efforts to build more indie cinemas. The Korea JoongAng Daily introduces some of the most well-known and well-run indie film houses in Seoul. The number of visitors at these cinemas is still relatively low. Some are trying to lure moviegoers by showing art films or masterpieces by well-known local and foreign directors. Others are equipped with libraries where people can watch DVDs of their choice and read scripts. A few even hold film classes. The venues aren’t breathtaking, but the following list paints a picture of the budding indie movement in Korea.


The Korean Film Archive, located in the Digital Media City near the Sangam World Cup Stadium in Seoul, has functioned as a nexus of many independent films.

Founded in January 1974 by the Culture Ministry, the archive has played a role of a guardian for non-commercial films but the role has been strengthened since the ministry designated it as an independent film-focused theater in July 2010, three years after it moved to the DMC from its old home within the Seoul Art Center in southern Seoul. 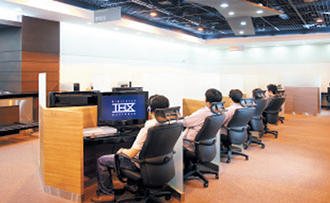 Visitors watch DVDs at the library of the Korean Film Archive. Provided by the KOFA

The archive has three theaters in the basement floor, which they collectively call the Cinematheque KOFA. Second of the theaters, the 150-seat one, is an indie-film-focused theater.

Not many Koreans are aware, but a growing number of Korean-made independent movies are being received well overseas. The Cinematheque KOFA has introduced such well-known Korean independent films such as the “Eighteen” by Jang Kun-jae, a story of a teenager in Seoul who does not want to go to school and instead make money for him and his girl friend. The film won the New Cinema Grand Prize at the Pesaro International Film Festival in Italy in 2010 and the Cinematheque KOFA screened it in August 2010 along with other well-made Korean independent movies produced in early 2010.

The Journals of Musan by Park Jung-bum, the winner of the Best Film award at the same Italian film event last year, was also introduced at the film house in June last year. It is based on a real story of a North Korean defector Jung Seung-chul who died of stomach cancer in 2008 after a hard life of adjustment to the South.

Nine independent films were selected and screened in 2010, while 12 last year. The directors of many of the films were also invited to the venue and had a conversation with the audiences.

This year, the Korean Film Archive, in cooperation with the Korean Film Council, screened feature-length films made by the students at the Korean Academy of Film Arts (KAFA). The “KAFA Films Special” event, held on Sept. 13-27, introduced 21 films and 12 of the directors participated in the dialogues with the audience.

Boasting the biggest archive of films in Korea, the Korean Film Archive has also showcased many of arthouse films or the films directed by famous directors or starred by famous actors.

In July 2010, the archive showcased an exhibition of Akira Kurosawa, showing 21 films from the collection of the legendary Japanese director. This year, it hosted Tatsuya Nakadai, a famous Japanese actor, showing many of the films he starred. The Werner Herzog exhibition was also held in May and June, showing 34 films by the German film director.

Currently, the Cinematheque KOFA is showcasing the movies directed by Lee Doo-yong, a renowned Korean director.

They host dialogue with directors on a nearly weekly basis. Between January and February, a total of 11 Korean movies selected out of 140 movies produced last year were shown and the directors of the eight of the movies came to talk with the audiences.

Darcy Paquet, a well-known Korea movie critic, is also presenting classic Korean movies at the KOFA every month, having a conversation with the audiences of the movies he presents.

The Cinematheque KOFA runs six days a week, except for Monday, and shows at least three films a day.