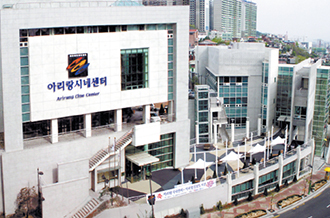 The Arirang Cine & Media Center, located in Donam-dong, Seongbuk District, is focused on family-, youth- and children-oriented independent films. Provided by the center

The Arirang Cine & Media Center, located in Donam-dong, Seongbuk District, had served as a small community center since its foundation in 2004, but things changed in December 2009, when the Korean Film Council designated it as an independent film theater.

Since then, it has quickly turned into a sought-after place for independent moviegoers with a series of special showcases of indie films. The center, managed by the entrusted caretaker, Seongbuk District Office, has three multi screens equipped with more than 500 seats, one on the second floor, one on the first basement and one on the second basement.

The sixth Film Festival for Women’s Rights was held at the center in September, showing 33 films from 10 countries. In August, it played host to the Seoul international Youth Film Festival. A total of 141 films made in 40 countries were shown during the event.

Three special events were also held this year beginning with a family-themed animation festival for children in May 2012. Last month, it held an independent documentary exhibition about music.

The films introduced by the center are more family- youth- or children-focused than other indie film houses, according to indie film programmers.

Movie editing classes are also available at the center.